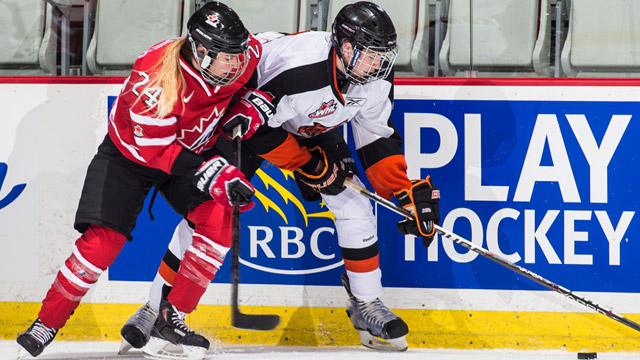 The Canadian ladies came out cool and confident in the first, backed up by focused netminder Shannon Szabados (Edmonton, Alta./Northern Alberta Institute of Technology, ACAC), giving them the strong start they needed coming off a close 3-2 loss to the Calgary Flames on the opening day of the early season tournament featuring three Midget AAA teams.

A boarding penalty later in the period cost the Tigers dearly, with Melodie Daoust (Valleyfield, Que./McGill University, CIS) scoring her first goal wearing a Canada's National Women's Team jersey at 17:01 on the clock and Mikkelson again assisting along with blueliner Lauriane Rougeau (Beaconsfield, Que./Cornell University, ECAC), to make it 3-0 going into intermission.

The red and white continued its quick momentum going into the second, with Mikkelson notching her third point and Johnston snagging her second goal on another power-play opportunity to make it 4-0 at 16:30 in the period, a score they held onto for the remainder of the period.

Irwin added another midway through the third to make it 5-0, and it looked like Canada might skate away with a shutout, but a last ditch effort on a power play in the dying minutes of the game gave the SEAC Tigers the chance they needed to finally put the puck past the steadfast Szabados. Nevertheless, by the time the final whistle sounded, Canada had climbed its way to a comfortable 5-1 win over the team from Medicine Hat, earning its first win of the Icebreaker Tournament at Hockey Canada's home arena in Canada Olympic Park.

The SEAC Tigers look for their first Icebreaker win Saturday at 12 p.m. MT when they face the Calgary Flames, while Canada's National Women's Team plans to make it two straight when they take on the Strathmore Bisons at 3 p.m. MT on Day 3 Saturday. Follow all the action live from the Markin MacPhail Centre in Calgary at www.Twitter.com/HC_Women.