CALGARY, Alta. – It was another exciting 4-3 game Sunday afternoon between Canada's National Women's Team and the Edge School for Athletes. But this time the win went to the boys' prep team from the local sport school. 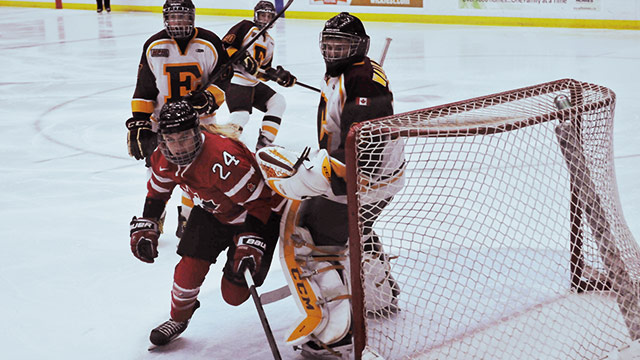 The Edge Mountaineers opened and closed the scoring on the Markin MacPhail Centre ice, with Austin Holmes slipping the puck past Canadian netminder Charline Labonté (Boisbriand, Que./Montreal, CWHL) at 8:46 in the first. His teammate Aidan Keane made it 2-0 at 17:34 in the period, but a two-goal lead is all the ladies in red and white would allow, as Mélodie Daoust (Valleyfield, Que./McGill University, CIS) replied 22 seconds later to narrow the gap to 2-1 going into first intermission.

The back-and-forth action continued up and down the ice into the middle frame, with Vicki Bendus (Wasaga Beach, Ont./Brampton, CWHL) tying it up at 12:48 in the second  and Jennifer Wakefield (Pickering, Ont./Toronto, CWHL) adding another at 17:32 to make it 3-2 and give Canada its only lead of the game. But the Edge answered quickly, with Taro Hirose tying it up  at 13:53 and Hayden Ursulak scoring the game-winner in the last 31 seconds in the period.

The Canadian ladies fought hard for a comeback throughout the third period, but despite two time-outs late in the game and a final face-off in the Edge School's end of the ice in the dying seconds of the game, the red and white were unable to put the puck past Mountaineer netminder Branson Schneider by the time the final buzzer sounded on the game. Schneider faced 30 shots while Labonte faced 22 shots total over three periods of play.

This was the second of two exhibition games between Canada's National Women's Team and the Edge School for Athlete's boys' prep team. The last time these two teams faced off, Canada edged the Mountaineers 4-3 last Thursday, Oct. 3, also at the Markin MacPhail Centre, home arena for Hockey Canada.

Canada's National Women's Team is on the road this coming week for two games against Midget AAA teams from the Alberta Midget Hockey League. The puck drops against Lethbridge at 6:45 p.m. MT on Tuesday, Oct. 8, while Canada's game against Medicine Hat is set for 7:45 p.m. MT on Wednesday, Oct. 9. Check out game stories, statistics and more at www.hockeycanada.ca/nwt.