GOALTENDERS SHINE AS NORTH STARS AND CONTACTS SETTLE FOR DRAW

SAULT STE. MARIE, Ont. – Brian Kment made 32 saves and Rylan Parenteau answered with 35 stops of his own as the Sault Ste. Marie North Stars and Saskatoon Contacts skated to a 1-1 tie at the 2013 TELUS Cup on Thursday night. 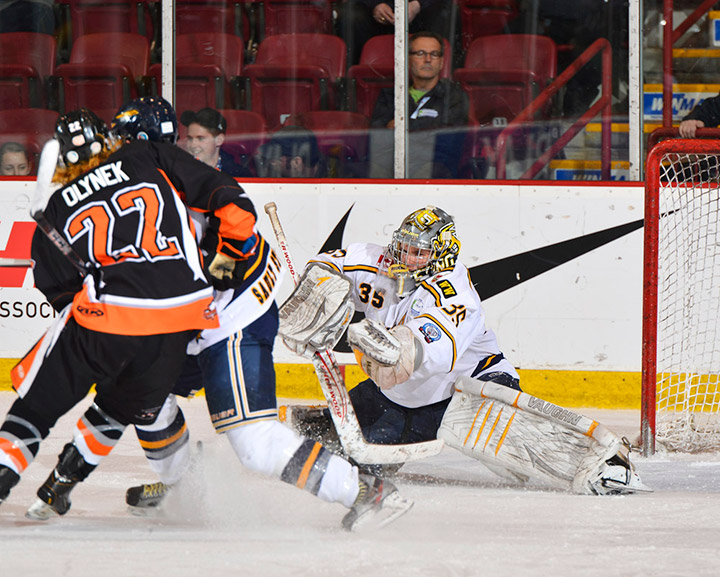 The draw leaves Sault Ste. Marie (2-1-1) and Saskatoon (1-1-2) in a five-way battle for four semifinal spots heading into the final day of preliminary round action on Friday.

Matt Pinder scored the lone goal for the North Stars, his tournament-leading sixth midway through the first period, but that would be the only puck to beat Parenteau, who made at least 10 saves in each period, including a baker’s dozen in the third when the hosts held a 13-11 advantage.

Kolten Olynek replied just past the midway point of the second period for the Contacts, who played to a tie for the second day in a row, although Wednesday’s 5-5 draw against Red Deer was much more of an offensive showcase.

Kment, who made 47 saves in his only other start of the tournament, a 4-3 victory over the Red Deer Chiefs on Tuesday night, was at his busiest in the first period, when he faced 14 Saskatoon shots.

The North Stars wrap up the preliminary round on Friday night against the Rousseau Royal de Laval-Montréal (4:30 p.m. ET), while the Contacts close against the winless Valley Wildcats in the afternoon (1 p.m. ET).