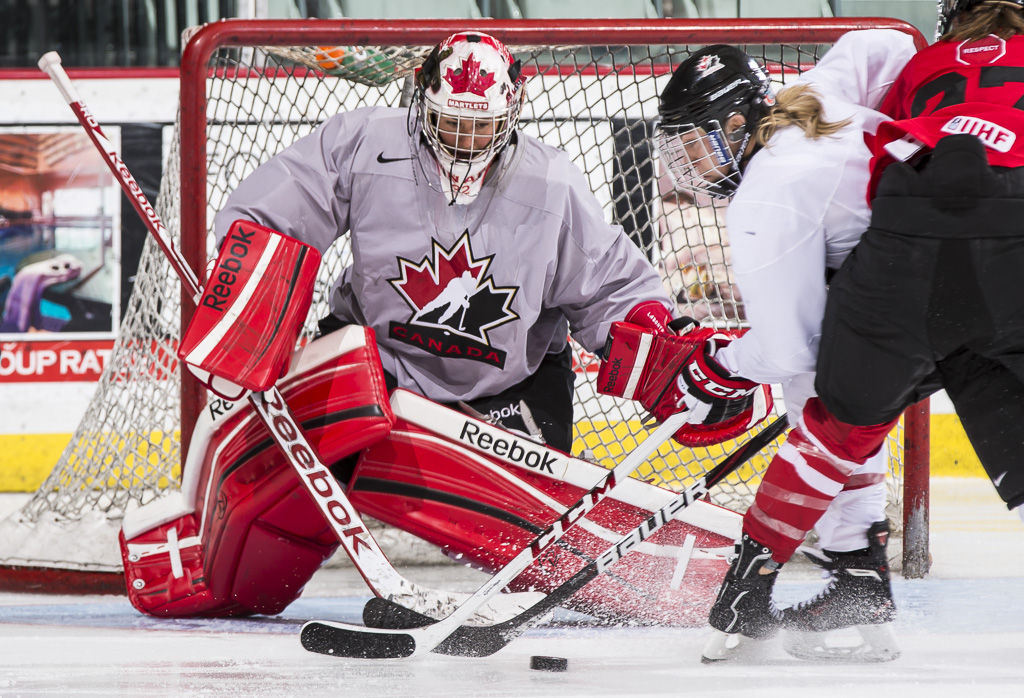 The 2010 Olympic gold medallist jumped on White’s first power play of the game late in the opening period Saturday at the Markin MacPhail Centre, getting ahold of the puck with less than one minute left on the clock and firing it past Red netminder Charline Labonte (Boisbriand, Que./Montreal, CWHL) to make it 1-0 going into intermission. Forward Kelly Terry (Whitby, Ont./University of Minnesota, WCHA) and defenceman Lauriane Rougeau (Beaconsfield, Que./Cornell University, ECAC) were credited with assists.

With the series tied at one win-apiece coming into Saturday’s game, both Red and White skated onto the ice ready to do what it takes to win, skating hard, making crisp passes and protecting their goalies at all costs, keeping the score close throughout the game and fans entertained in the stands.

It wasn’t until late in the second period that Red finally retaliated with a goal of its own, with Cayley Mercer (Exeter, Ont./Clarkson University, ECAC) tipping in a beauty point shot from blueliner Tessa Bonhomme (Sudbury, Ont./Toronto, CWHL). Nicole Kosta (Mississauga, Ont./Quinnipiac University, ECAC) also helped out on the goal that tied up the game at 17:08 in the middle frame.

Both teams came out of the dressing rooms in the third determined to break that tie, but neither could find the back of the net by the time the final 20 minutes ran down on the clock, sending the game into five minutes of sudden victory overtime. Still, neither Red nor White would concede, and it wasn’t long before the buzzer sounded on the extra frame as well.

Players in their red and white jerseys eagerly leaned against the boards to watch the shootout unfold, while spectators inside the WinSport Canada Athletic & Ice Complex facility cheered in anticipation as each player skated down the ice and sent the puck flying toward the opposition’s net.

White’s Caroline Ouellette (Montreal, Que./Montreal, CWHL) set expectations high right of the start, as she glided down the ice, moved the puck back and forth with her stick blade, spun around and then slid it into the right side of the Red net.

Red’s Haley Irwin (Thunder Bay, Ont./Montreal, CWHL) answered with a shootout goal of her own, keeping the excitement and intensity high for players and fans alike. But that would be the last goal Red would score, and the last that White netminder Genevieve Lacasse (Kingston, Ont./Boston, CWHL) would allow.

And as Agosta-Marciano skated down the ice, stickhandling with ease, she waited until just the right moment to deke out Labonte and take full advantage of her scoring chance, once again slipping the puck over Red’s goal line, this time to seal the 2-1 win – and series victory – for White.

Keep following all the 2013-14 Canada’s National Women’s Program action at www.HockeyCanada.ca/NWT, www.Twitter.com/HC_Women and on Facebook at www.Facebook.com/HockeyCanada.