Even though full-contact (body-checking) is restricted to older age groups, the incidental contact and the speed with which hockey is played makes the brain is vulnerable to injury at all ages. Trauma may occur through direct contact to the head or face or indirectly through a whiplash effect. Injuries to the brain are characterized by an altered state of mind. It is the altered state of mind that is the key thing to look for with any head injury.

NOTE: Children are more sensitive to the effects of a concussion and will need to have a longer period of rest prior to returning to activity and the sport.

A concussion is a common injury, but since they cannot be detected on x-rays or CT scans, they have been difficult to fully investigate and understand. Fortunately, there have been many important advances in our knowledge of concussions, including how to identify, manage and recover from a concussion. Although concussions are often referred to as ‘mild traumatic brain injuries’ and often resolve uneventfully, ALL concussions have the potential for serious and long-lasting symptoms and so must be treated carefully and in consultation with a physician.

Click here to link to the Coaching Association of Canada information on concussions.

What Causes a Concussion?

Concussions are brain injuries caused by the brain moving inside of the skull. The movement causes damage that changes how brain cells function, leading to symptoms that can be physical (headaches, dizziness), cognitive (problems remembering or concentrating), or emotional (feeling depressed). A concussion can result from any impact to the head, face or neck or a blow to the body which causes a sudden jolting of the head.

To see how a concussion occurs, click on diagram below. 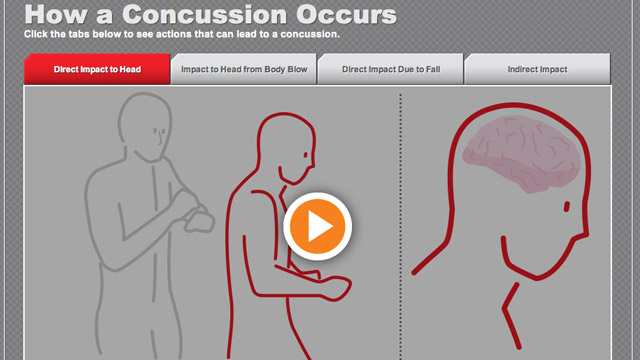 Where Can I Learn About Signs And Symptoms?

What Do I Do If I Think a Player Has a Concussion? 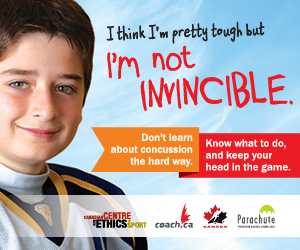 Is there such a thing as a concussion helmet? The answer is a resounding NO! Helmets are important and very effective against localized head injuries such as skull fractures but they have limited effectiveness against concussions.

Suffice it to say that regardless of what you hear or read, concussion helmets do not yet exist. Reducing the concussion risk will require behavioural adjustments on many fronts.

Although the facemask does prevent dental injuries, it is still recommended that all players who play hockey wear an internal mouthguard. Dental injuries still occur despite the use of a facemask. Properly fitted mouthguards have been shown to significantly reduce dental and oral injuries in hockey. However, their role in preventing or reducing the severity of concussions has not been scientifically proven.

How Can a Concussion Be Prevented?

Never Check To The Head –

Never Hit From Behind –

Beginning with the 1985-86 season, Hockey Canada introduced a rule to eliminate checking from behind. With the implementation of rules, prevention and awareness Hockey Canada will continue to decrease the number of concussions in the game. But it takes more than this; it takes cooperation from all involved including parents to continue to enforce respect and safety in the game.

Here are some great skills to help to keep you be a stronger player and stay safe as a hockey player. To learn other great tips visit the new Hockey Canada concussion app!
» watch drills

Communicate With Your Son or Daughter

As a parent you are encouraged to visit the Hockey Canada website to gain an understanding of the standard of play and rules emphasis initiative.

Next time you are at the rink, try watching the game from the perspective of the officials.

Work With Your Child’s Coach

As a parent, you are an important component of the team’s structure. Work with your child’s coach to support the rule emphasis and work with your coaches to teach the players what is expected of them. A major key is to encourage respect for the officials, their teammates and other players around them.

Check out www.hockeycanada.ca/apps, download the app and play safe.

Say No To Locker Boxing!

A new type of violence has found its way into amateur hockey and is cause for great concern within minor hockey in Canada. Locker boxing is an activity that takes place when players put their helmets and gloves on with the intention of punching each other in a vicious manner – often in the head area.

Hockey Canada does not condone this type of behaviour or any other type of fighting between players either on or off the ice. With increased awareness and education concerning concussions in sport, it is becoming more apparent that any type of blow to the head area has the potential to cause severe injury regardless of whether or not a player is wearing a helmet. Concussion injuries can cause lengthy loss of playing time and end players’ careers, and recent evidence suggests that the cumulative effects of multiple concussions can have a detrimental effect on the lives of young athletes in the long term.

Coaches and team leaders are asked to work to eliminate this type of behaviour both in the dressing room and in areas where this behaviour can potentially occur by implementing prevention plans and team rules against locker boxing and fighting, and by clearly defining these to all coaches, team managers, safety people and parents throughout the season. This, combined with player and parent education with respect to concussions, will help to eliminate this type of behaviour.

Another significant component of preventing this type of behaviour in the dressing room, or during any team function, is proper team supervision. Hockey Canada stresses the importance of players being supervised at all times during team activities to help ensure a safe environment.

Hockey Canada asks all involved with the game in leadership roles to assist in ensuring that this type of behaviour is eliminated and hockey continues to offer a safe, fun and positive experience for all involved.

Minor hockey personnel are encouraged to visit the Hockey Programs section of the Hockey Canada website at www.hockeycanada.ca for more information on bullying, harassment and abuse.