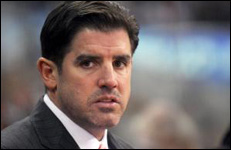 Peter Laviolette recently led the Philadelphia Flyers to a Stanley Cup Finals appearance as head coach after spending parts of five seasons as head coach of the Carolina Hurricanes (2003-04 to 2008-09), where he compiled a 167-122-34 record in 323 games. In 2005-06, he helped the Hurricanes set franchise records in wins (52) and points (112). In the 2006 Stanley Cup playoffs, Laviolette guided Carolina to a 16-9 record and its first Stanley Cup Championship. He was also named a finalist for the Jack Adams Trophy as NHL Coach of the Year in 2006.

Prior to joining the Hurricanes, Laviolette served as head coach of the New York Islanders for two seasons (2001-03). He registered a 77-62-25 regular season record and led the team to Stanley Cup Playoff berths in both seasons.

Prior to serving as the Islanders head coach, Laviolette served as an assistant coach with the Boston Bruins in 2000-01 after serving as head coach of the Bruins’ American Hockey League affiliate, the Providence Bruins, for two seasons (1998-99 to 1999-2000).

A native of Franklin, Mass., Laviolette was born on July 12, 1964, and played 11 seasons of professional hockey, mostly in the AHL and International Hockey League, and appeared in 12 games with the New York Rangers during the 1988-89 season.