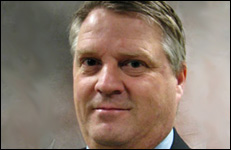 Peter Elander has been coaching at various levels since 1988. His experience includes a coaching position on the Swedish U20 National Team, as well as working with high-profile hockey players such as Henrik and Daniel Sedin, amongst others. Elander has been associated with the Swedish Women’s National Team Since 2001. He was Head Coach of Team Sweden at both the 2006 And 2010 Olympic Winter Games. His team’s upset Of Team USA in the 2006 Olympic semi-final, earning Sweden a silver medal, made the IIHF’s list of the 100 Top Stories of The Century. Elander has won two IIHF World Championship bronze medals. As a player, he won the bronze medal with Team Sweden at the 1980 U20 World Championship in Finland, moving on to play in the Swedish Elite League with Sodertalje and Frolunda during the 1980s. In 2010, he assumed the position of associate head coach of the University Of North Dakota Women’s Team (NCAA, Division I).