The red and white skated away from the final game of this year's Icebreaker Tournament with a 4-1 win Sunday over the AMHL's Strathmore Bisons, capping off the four-day pre-season event with one loss and three wins. Earlier in the tournament, Canada fell 3-2 to the Calgary Flames, but then went on to win three straight, including a 5-1 win over the SEAC Tigers from Medicine Hat and another win over Strathmore, coming back late in the game to take the game 7-4 over the Bisons. 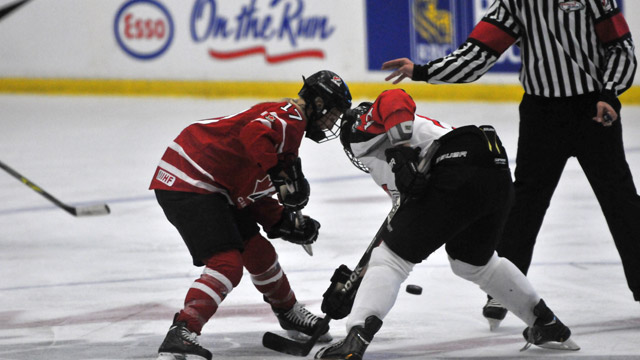 The Bisons also entered Sunday's final with a 2-1 record, having beat the Tigers 4-2 on Thursday and the Flames 4-3 on Friday, setting the stage for an exciting re-match between the top two teams at the tournament Sunday at the Markin MacPhail Centre.

Forward Vicki Bendus (Wasaga Beach, Ont./Brampton, CWHL) cracked the scoreboard first for Canada, finding the back of the Strathmore net at 9:04 in the first off a Gillian Apps (Unionville, Ont./Brampton, CWHL) assist. Defenceman Meaghan Mikkelson (St. Albert, Alta./Alberta, CWHL) added another before the period was up, with Jennifer Wakefield (Pickering, Ont./Toronto, CWHL) getting her first of two assists on the night, at 17:21 on the clock to make it 2-0 going into intermission.

Strathmore would score its lone goal of the game at 6:22 in the second, with Ryan Zenwick putting the puck past Canadian netminder Geneviève Lacasse (Kingston, Ont./Boston, CWHL), who took it all in stride and remained calm and cool between the posts. It didn't take long for the Canadian ladies to regain their two-goal lead, with Wakefield again assisting, this time getting the biscuit to Caroline Ouellette (Montreal, Que./Montreal, CWHL), who made it 3-1 at 13:40 in the middle frame.

Canada's insurance marker came at 12:39 in the third, when Haley Irwin (Thunder Bay, Ont./Montreal, CWHL) picked up the puck in a scramble out front off bounces from Jayna Hefford (Kingston, Ont./Brampton, CWHL) and Rebecca Johnston (Sudbury, Ont./Toronto, CWHL). From then on out it was just a matter of maintaining the lead, and Canada did exactly that, controlling the puck and strolling to victory in Sunday's game against the Bisons - and at the Icebreaker Tournament.

The tournament was hosted by Canada's National Women's Team and featured three Alberta Midget Hockey League teams. It has served as an exciting preview of what's to come during the 2013-14 season, as Team Canada plays more than 30 games against Midget AAA teams from across the province as part of its intense exhibition schedule leading up to the 2014 Olympic Winter Games in Sochi, Russia, next February.

Follow the road to Sochi with Canada's National Women's Team at www.hockeycanada.ca/nwt, www.facebook.com/hockeycanada and www.twitter.com/hc_women.