Although the AMHL's Strathmore Bisons (2-1) started off strong, with two goals in the first period for a 2-0 lead going into the second, Canada's National Women's Team (2-1) stepped back onto the ice after 20 minutes of play with an extra spring in their skates, scoring two in the middle frame and five in the third period alone to stage an exciting comeback and win their second straight game at the Icebreaker Tournament. 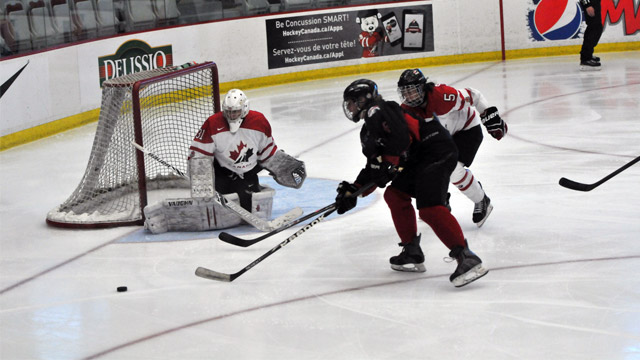 Rebecca Johnston (Sudbury, Ont./Toronto, CWHL) set the example for her fellow Canadian ladies, scoring her first of two goals at 4:29 in the second. Natalie Spooner (Scarborough, Ont./Toronto, CWHL) followed suit about 40 seconds later to make it 2-2 at 5:11 in the middle frame.

The Bisons kept pace, with Tristan Thompson scoring an unassisted marker at 6:08 and Mackenzie Bauer scoring shorthanded at 14:47 in the period to make it 4-2 going into intermission and set the stage for what would quickly become an exciting third period.

But despite some solid play from Strathmore, the Canadians owned the final frame, scoring five goals in less than six minutes to show what the red and white are really all about.

Rebecca Johnston again got it started, scoring her second of the game at 8:51 in the period, with help from Jenelle Kohanchuk (Winnipeg, Man./Boston University, HE). The two forwards paired up again with Johnston assisting Kohanchuk at 11:25 to tie it up at four-apiece. Hayley Wickenheiser (Shaunavon, Sask./University of Calgary, CIS), Meaghan Mikkelson (St. Albert, Alta./Alberta, CWHL) and Bailey Bram (Ste. Anne, Man./Brampton, CWHL) all added goals of their own to the scoreboard within two minutes of each other. Johnston and Kohanchuk both had four points total, while Mikkelson had three of her own. Eleven Canadian players total contributed points to the 7-4 final tally.

The Bisons will have their chance at a comeback Sunday, when they face off against Canada's National Women's Team for a rematch at 4 p.m. MT in the final game of the Icebreaker Tournament. The pre-season event is being hosted by Team Canada and features three teams from the Alberta Midget Hockey League, and is part of this season's preparation for the 2014 Olympic Winter Games. Follow www.twitter.com/hc_women for live updates from the rink.