FLAMES USE THREE-GOAL BURST TO BEAT CANADIAN WOMEN AT ICEBREAKER 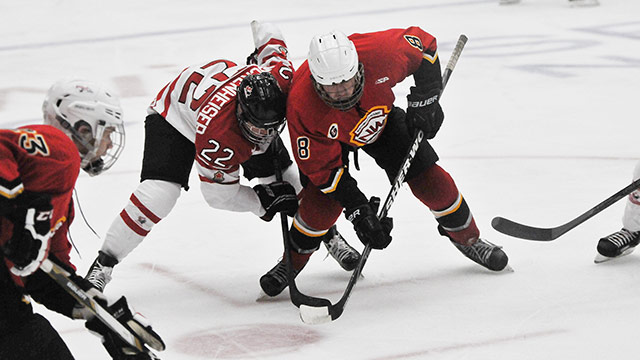 The tournament includes the national side and a trio of Alberta Midget Hockey League teams, and is a preview of Canada’s National Women’s Team Midget Series, a 26-game schedule to help Team Canada prepare for the 2014 Olympic Winter Games.

Wakefield opened the scoring for Canada (0-1) just past the eight-minute mark, driving to the net and jamming home the rebound of a Rebecca Johnston (Sudbury, Ont./Toronto, CWHL) shot.

It was the lone goal in a first period that saw the Canadians outshoot the Flames 13-7.

Calgary (1-0) equalized 2:28 into the second period off the stick of Dondre Watson, and took the lead for good six minutes later when Zach Finlay converted a penalty shot, going low to the blocker side past Canadian netminder Geneviève Lacasse (Kingston, Ont./Boston, CWHL).

The insurance goal came midway through the middle frame, with Curtis Ceccanese redirecting a Watson feed past Lacasse for the 3-1 goal.

Lacquette got one back for Canada late in the second period, hammering a point shot off the post and in just one second after a Canadian power play had ended, but that would be as close as the women’s side would get.

Both teams directed six shots on goal in the third period; overall, Canada held a 25-21 advantage.

Austin Hannaford made 23 saves to pick up the win for the Flames, while Lacasse finished with 18 stops.

Canada makes its second attempt at win No. 1 on Friday night when it faces the SEAC Tigers in the late game (9 p.m. MT), while the Flames will meet the Strathmore Bisons in a battle of 1-0 teams in the early contest (6 p.m. MT).