CALGARY, Alta. – Canada’s National Women’s Team may have been edged out in overtime Monday night, falling 4-3 to the Midget AAA Calgary Flames, but the real game-winner was the Canadian Breast Cancer Foundation, which skated away with thousands of dollars thanks to the support of the players, parents and fans in attendance at the annual “pink in the rink” fundraiser held at Father David Bauer Olympic Arena. 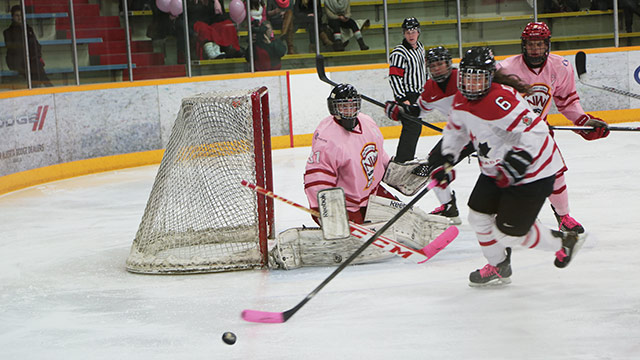 The event is hosted every year by the Calgary Flames of the Alberta Midget Hockey League, who wear pink jerseys for the occasion and following the game invite their mothers onto the ice to give the important women in their lives the jerseys of their backs. Monday’s special evening included initiatives to raise both awareness and cash, with educational pamphlets handed out at the arena entrance, while a pink balloon draw offered plenty of prizes to be won, and an autographed Canada’s National Women’s Team jersey was auctioned off after the final buzzer on the game had sounded.

Well there was plenty of pink off the ice, there was also plenty of action on the ice, with the puck flying up and down the ice, but never finding the back of the net in the first period.

Team Canada forward Natalie Spooner (Scarborough, Ont./Toronto, CWHL) cracked the scoreboard first, scoring an unassisted marker at 2:40 in the second. But Carter Czaikowski answered for the Flames a minute later to tie it up, and a mishandled puck in front of the red and white net allowed Kyle Lissel to score a shorthanded goal, putting the Calgary boys up 2-1 after 40 minutes of play.

But Canada kept plugging away, with Spooner assisting Rebecca Johnston (Sudbury, Ont./Toronto, CWHL) less than a minute into the third to tie it up at two-apiece, and Gillian Apps (Unionville, Ont./Brampton, CWHL) following suit two minutes later to give the red and white a 3-2 lead on the power play, with assists from Catherine Ward (Montreal, Que./Montreal, CWHL) and Caroline Ouellette (Montreal, Que./Montreal, CWHL).

The exciting back-and-forth play continued throughout the period, and Lissel was able to score his second of the night midway through the third to tie it up again at 3-3 and send the game into five minutes of four-on-four overtime. The final tally could have gone either way, but in the end it was Patrick Lyster to score the thrilling game-winner at 3:23 in the extra frame for the 4-3 final score.

Nevertheless, both benches were cheering along with the crowd at the end of the game, as “pink in the rink” hosts announced that together everyone in the arena had raised an incredible $14,000 for the Canadian Breast Cancer Foundation, which is “dedicated to leading the way in support of our vision of creating a feature without breast cancer.” Please visit www.cbcf.org for more information.

To stay up-to-date on all of Canada’s National Women’s Team exhibition action this season, against Alberta Midget Hockey League teams and rivals the United States, leading up to the 2014 Olympic Winter Games, check out Hockey Canada’s official website at www.hockeycanada.ca/nwt and follow Team Canada on social media at twitter.com/hc_women and www.facebook.com/hockeycanada.