STOCKHOLM, Sweden - Jeff Skinner wasn't on the ice much, but made a huge impact in Canada's 2-1 win over the Czech Republic at the IIHF Ice Hockey World Championship on Sunday. 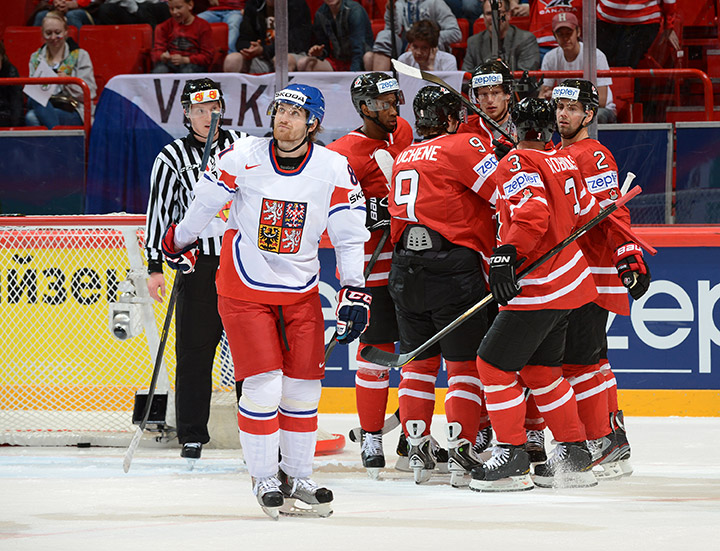 The Carolina Hurricanes forward scored on an end-to-end rush after weaving through the Czech defence and burying a wraparound behind goalie Ondrej Pavelec at 6:55 of the third period.

His goal stood up as the winner as Canada (5-0-1) secured a quarter-final berth in the tournament.

“Any goal when you play for your country is pretty cool,” Skinner said.

His eight minutes 48 seconds of ice time was the least among Canadian forwards Sunday as the 20-year-old from Markham, Ont., wears the Maple Leaf in his third world championship. His eighth career goal was a memorable one.

“When I got over the red (line) I knew I didn't want to dump it in and when I was at the hash marks, I saw the goalie a little bit out and challenging the shot,” Skinner said. “When he was cutting off my angle, I just tried to take it around the weak side and again, I think it sort of bounced off something”.

“I just sort of guessed and guessed right”.

Wayne Simmonds scored his first of the tournament for Canada, while defenceman Dan Hamhuis led all Canadian players in ice time and shifts despite joining the team the previous day.

Mike Smith made 30 saves for his second win of the tournament and also picked up an assist on Skinner's goal.

“It was off my left pad and kind of kicked it into the corner,” the Phoenix Coyotes goaltender said. “It was a well-placed rebound, let's say. It would have been nice to pass it, but I'll take it.”

“Skinny did the rest. The kid can skate pretty well, took it end to end and got a big goal for us.”

Petr Koukal replied for the Czechs (3-3-0), whose quarter-final prospects depend on beating Norway on Tuesday. The Czechs won the bronze medal the last two years.

Pavelec, who plays for the Winnipeg Jets, stopped 23 shots in taking the loss in front of a crowd of 6,117 at the Globe Arena.

“I'm not very satisfied we only scored one goal in the game,” Czech head coach Alois Hadamczik said via an interpreter. “This was the first time we really played our game at the tournament.”

The top four teams in each pool of eight advance to Thursday's quarter-finals, with one playing four and two playing three in each group.

Canada needed just a single point from the game to get in the quarter-finals, but three points for the regulation win means Canada will finish no worse than second in the Stockholm pool. At 16 points, the Canadians also kept the pressure on leader Switzerland with 17.

Canada concludes the preliminary round against winless Slovenia on Monday, while the Swiss finish against Belarus on Tuesday.

Host Sweden was third in their pool with 12 points and a game remaining. The Norwegians were fourth with nine.

The United States is ranked first in the Helsinki pool with 15 points ahead of Finland with 14. Russia is third with 12 ahead of Slovakia and Germany, which are tied for fourth with seven points.

Canada added Hamhuis following the elimination of his Vancouver Canucks in the first round of NHL playoffs. The 30-year-old played a regular shift from the opening faceoff Sunday.

Hamhuis said he skated in the morning and intended to monitor his energy during the game and inform the coaches if he felt winded.

But his full participation became necessary when defenceman Luke Schenn took a match penalty and was booted early in the second period. Hamhuis played 29 shifts and over 22 minutes.

“The intensity of the game, when you're playing such a tight-checking game, you don't tend to feel as tired as you do if the score is lopsided,” Hamhuis said. “With the type of game it was, it was a lot of fun to play out there.”

Canadian head coach Lindy Ruff joked wryly “we probably wouldn't have listened to him, especially after Luke went out” had Hamhuis asked to reduce his minutes.

“Tonight, I thought some of our defencemen looked a little young,'' Ruff said. “That's when you want the veteran guys to step up and pull through for you.”

Schenn was assessed a major and the match penalty for checking Zbynek Irgl from behind. Irgl suffered a bloody cut across the nose. Schenn's match penalty comes with an automatic game suspension, so Canada will be down to seven defencemen again against Slovenia.

“Refereeing is a giant black hole that I don't want to jump into,” Ruff said.

Hadamczik dove into that hole. His team took three minors in the second period and another two after Skinner's goal that hurt their efforts to tie the game.

“Both teams performed very well, but the referees did not,” Hadamcik said. “They missed many calls on our side. I've been to many world championships during my career and I never expressed this about the referees. This is the first time I'm angry with the referees.”

A match penalty is automatically reviewed by the tournament disciplinary committee. Ruff hoped for no further sanctions on Schenn because the Philadelphia Flyers blue-liner is another big-minute man for Canada.

The Canadians scored first for the fourth game in a row on a power-play goal from Simmonds in the first period. Canada scored once in five power-play chances and held the Czechs scoreless three times with an extra attacker. Koukal scored even-strength late in the first to pull the Czechs even.

Notes: Eighteen of the Canadian players have an NHL teammate on the Czech team … Montreal Canadiens forward Tomas Plekanec is expected to join the Czechs Republic … Russia added defenceman Nikita Zaitsvev and forward Yevgeni Kuznetsov to its roster Sunday.