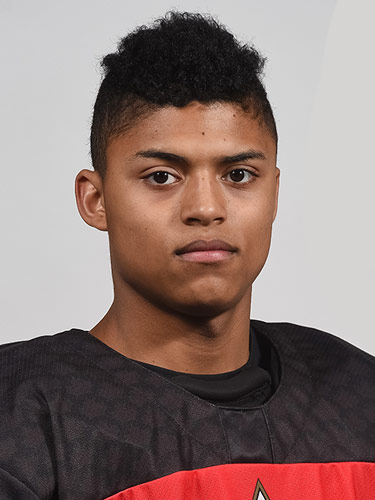 Niagara’s first-round selection, 12th overall, in the 2016 OHL Priority Selection … 2019-20: Captain with Niagara … Tied a career high with five points (5A) on Oct. 4 vs. Kingston … 2018-19: Third in Niagara scoring … Eighth in OHL scoring … Fifth in the OHL in assists … Tied for eighth in the OHL in plus/minus (+42) … Tied a career high with five points on Sept. 23 vs. Mississauga (1G 4A), Oct. 11 vs. Barrie (2G 3A) and Jan. 19 vs. Flint (2G 3A) … 2017-18: Second in Niagara scoring … 2016-17: Fourth in Niagara scoring … Led Niagara in rookie scoring … Third in OHL rookie scoring … Set a franchise record for points by a rookie … Named to the OHL First All-Rookie Team … Set a career high with five points (1G 4A) on March 12 vs. North Bay … Minor Hockey: Lists his father, Kahlil, as his favourite minor hockey coach … Won a gold medal with GTHL Blue at the 2016 OHL Gold Cup … Reached the championship game at the 2016 OHL Cup with the Toronto Marlboros (Major Midget AAA), and was named to the tournament all-star team … Played in the 2016 GTHL Top Prospects Game … Won a gold medal with Toronto Pro Hockey at The Brick Invitational Tournament in 2010, and was named MVP … Started playing minor hockey in Kissimmee, Florida