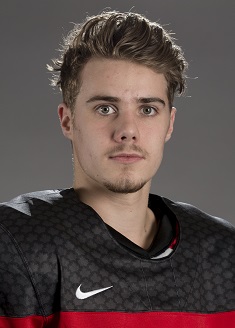 Son of Sheldon and Krystal … Has one brother, Quinton, and two sisters, Jayda and Danaka … Favourite NHL team growing up: Los Angeles Kings … Favourite player: Anze Kopitar … His brother, Quinton, played for Canada’s National Junior Team in 2011 and 2012, and was a first-round selection of the Florida Panthers in the 2010 NHL Entry Draft