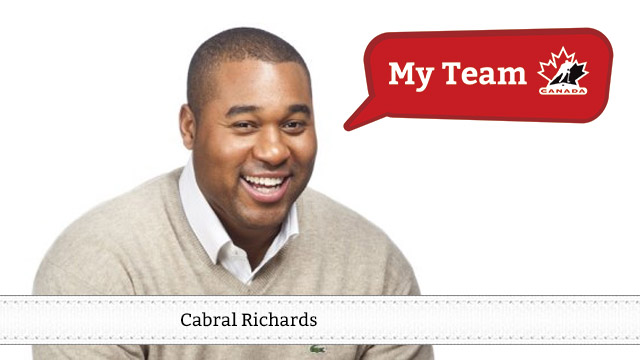 Richards is best known for his interviews with L.A. Lakers superstar Kobe Bryant. During their odd-couple four-year relationship, he went from trying to get an invite to the “Casa de Bryant” ­– prompting answers from Bryant such as, “Sure, it's 8 Out of Your Mind Avenue” to scoring an invitation on Bryant's private helicopter.

Richards has also interviewed LeBron James and Kobe Bryant together, given Aaron Rodgers a muppet, played his own character in NHL 14 against Martin Brodeur and conversed with Mike Tyson at his home. He hosts the ESPY Awards Red Carpet special and his “Cabbie Presents: The Podcast” was recognized by iTunes Canada on its Best of 2012 list.

WHY?: Aesthetically, this will be the most distinctly “Canadian hockey player” team ever. Brent Burns, Kevin Bieksa and Milan Lucic are intimidating and look very “Canadian.” Claude Giroux, Matt Duchene and Mike Richards have great flowing locks, throwback-style hockey hair.

All players must grow beards starting Jan. 1, so by the time they reach Sochi, they look especially grizzly. All the beards will look great with the retro Team Canada sweaters. Brent Burns is the early favourite for the “Schick Quattro Man of the Winter Games.” Las Vegas has him listed at -450. Dustin Penner is also the hairiest player in the NHL – perfect for Siberian-like temperatures in mid-February.

Jason Garrison will be the team's DJ, playing the soundtrack for this tremendous experience. Also, it's a serious tournament, and everyone's focused, so you need a few guys to keep things loose. This year, Dustin Penner and Kris Versteeg will provide moments of levity in the dressing room.

Tweets
Follow us on Twitter
Recent News
Most Popular
June 6, 2014
Brad Pascall steps down as vice-president of hockey operations/national teams to take management position with NHL's Calgary Flames
February 23, 2014
Canada's National Teams win gold medals at 2014 Olympic Winter Games
Jason La Rose - February 22, 2014
Tri-City teens to Sochi standouts
12 years after sharing a WHL exhibition experience, the careers of Carey Price and Shannon Szabados cross paths again
Kristen Lipscombe - February 17, 2014
Back in black (and white)
20 years after his first Olympic experience, Lonnie Cameron returns to the game’s biggest stage
David Brien - February 15, 2014
Making it official
Chris Carlson and Jesse Wilmot continue their rise in the officiating world in Sochi
MORE
Accept
Our sites use cookies to help streamline your experience and enable us to plan future improvements. By continuing to use our site, you consent to cookies being used. For more information about how Hockey Canada handles the information we collect, please review our privacy policy.
© Copyright 2021 Hockey Canada