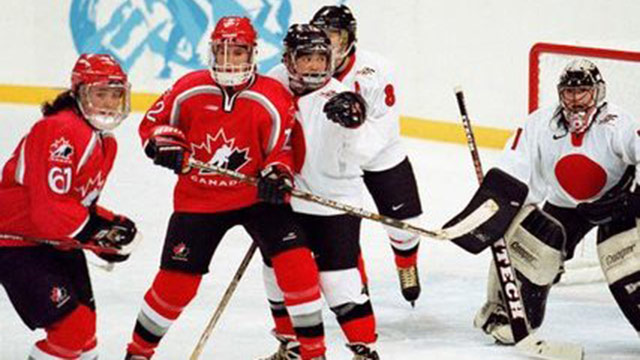 The significance of the game was not lost on the players, says Wilson, the team’s captain. “We enjoyed being a part of that history, knowing that it was such a big moment for women’s hockey.”

Goyette put her name in the record books 5:46 into the first period when she buried a Wickenheiser rebound for Canada’s first goal. With the score 2-0 late in the opening frame, Wickenheiser scored her first Olympic goal, with Wilson picking up the first assist.

The line of Goyette, Wickenheiser and Wilson had played together before the Games, and Wilson knew she was skating beside some skill. “I knew if I got the puck to one of them good things would happen.” The trio combined for 12 points in the game.

Wickenheiser, in particular, made an impression on hockey fans, and not just with her four-point performance. Christie Blatchford wrote in the Toronto Sun that the 2014 flag bearer’s physical play is a delight to watch and, “who, given the choice, goes through the opposition rather than around it.”

A six-goal second – including a goal each from Goyette, Wickenheiser and Wilson – gave Canada a 9-0 cushion after 40 minutes.

Once the game got out of hand the focus shifted to working on the small details but still pressing and playing aggressive. Four goals in the second half of the third period rounded out the scoring.

To its credit, Japan made Canada work to the final horn. “They never stopped pushing, [battling hard] in front of the net and skating hard,” says Wilson. “They always kept it clean and in the honour of a good hockey game.”

1932 – William Cockburn recorded his second shutout in a row as Canada, represented by the Winnipeg Hockey Club, blanked Germany 5-0. Canada beat the Germans for the second time in the four-team, double round-robin tournament; it won the first meeting 4-1 two days earlier.

1936 – Canada beat Austria 5-2 and ran its unbeaten streak at the Olympics to 20 games. Canada won its third straight at these Games without taking a penalty.

1948 – Murray Dowey recorded his third straight shutout – and fifth of the Games – as Canada defeated Switzerland 3-0 to finish the round robin 7-0-1. Canada finished tied for first with Czechoslovakia but won the gold medal thanks to a better goal differential.

1964 – The Soviet Union scored a minute-and-a-half into the third period and nursed the lead the rest of the way, beating Canada 3-2. After winning its first five games, Canada dropped its second in a row and failed to medal for the first time in Olympic history.

1968 – Canada fell to Finland 5-2, the first win ever for the Finns over the Canadians at the Olympics or IIHF World Championship. Danny O’Shea and Billy MacMillan scored for Canada.