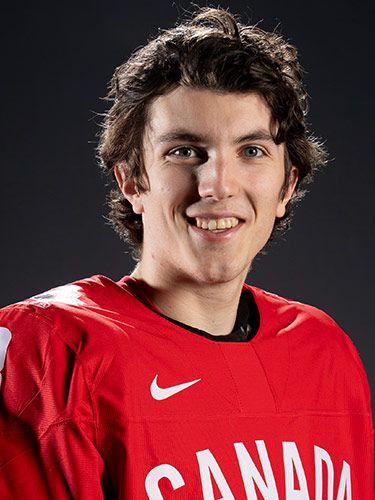 Kootenay’s first-round selection, first overall, in the 2016 WHL Bantam Draft … 2019-20: Captain with Winnipeg … Third in Winnipeg scoring … Tied a career high with four points on Jan. 31 vs. Red Deer (4A) and Feb. 12 vs. Swift Current (4A) … 2018-19: Captain with Kootenay … Led Kootenay in scoring … Played in the CHL/NHL Top Prospects Game … 2017-18: Fourth in Kootenay scoring … Led Kootenay in rookie scoring … Led the WHL in rookie scoring … Tied a career high with four points (1G 3A) on Sept. 29 vs. Spokane … Minor Hockey: Lists Mickey Kluner as his favourite minor hockey coach … Won a gold medal with Alberta at the 2016 Western Canada U16 Challenge Cup, and was named to the tournament all-star team … Named AMHL Top Forward in 2016-17 … Named to the AMHL First All-Star Team in 2016-17 … Won a silver medal with the Rocky Mountain Raiders at the 2016 Western Canadian Bantam Championship, and was named Top Forward … Named AMBHL South Division MVP and Top Forward in 2015-16 … Led the AMBHL in goals, assists and points in 2015-16 … Won a silver medal with Rocky Mountain at the 2015 Western Canadian Bantam Championship … Won the AMBHL championship with Rocky Mountain in 2015 … Named AMBHL South Division Rookie of the Year in 2014-15