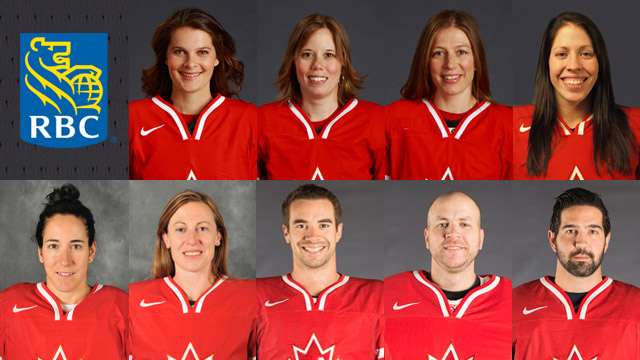 RBC names 47 Canadian athletes to its Olympic and Paralympic roster

Includes Summer and Winter Olympians and Paralympians, as well as Canadian amateur athletes

TORONTO – Today, joined by Canadian Olympians and Paralympians, Canadian Olympic Committee (COC) officials and special guests, RBC announced the names of 47 world-class Canadian athletes who will be part of the RBC Olympians program from 2013 through 2015. Combined, these exceptional athletes have earned a total of 31 Olympic medals and 36 Paralympic medals.

As the first and longest-standing corporate sponsor of the Canadian Olympic Team, RBC supports Canadian amateur athletes in both summer and winter sports. Since 1947, the company has encouraged healthy, active lifestyles, while building a lasting legacy for Canadian athletes through partnerships with organizations including the COC.

“Investing in our athletes is an investment in Canada, and we are thrilled to welcome these 47 incredible athletes to the RBC Olympians program,” said Dave McKay, group head, personal and commercial banking, RBC. “RBC has a longstanding tradition of being committed to helping Canadian athletes succeed—on and off the field of play and in their transition to life after sport. We’re here today to continue this important relationship.”

The RBC Olympians program, which began in 2002, is a national initiative that provides elite athletes with much-needed funding and flexible work arrangements which allow the athletes to focus on training and competition. The program also provides an opportunity to gain career-oriented skills and experiences that help them succeed in their transition to life after sport.

“Canada’s Olympic and Paralympic athletes are some of our country’s greatest assets and they are proof that the power of sport can improve our society, inspire and bring Canadians together,” said Marcel Aubut, president, COC. “Our athletes embody the true spirit of sport and Canada – though they may compete in individual events, they come together as a team and rally an entire country behind their efforts.”

With the upcoming Sochi 2014 Olympic Winter Games mere months away, all RBC Olympians will be looked up to by young Canadian athletes from across the country that dream of one day competing in the Olympic and Paralympic Games.

“Canadians rally behind our athletes – it’s in our DNA as a proud, patriotic country,” said the Honourable Bal Gosal, Minister of State (Sport), also present for today’s announcement. “Our Olympic and Paralympic athletes embody the true spirit of Canada, dedicating themselves to their sport and proudly representing their country on the world stage.”

Continuing its legacy of supporting amateur athletes, the RBC Olympians program recruits and hires both current and retired Olympic and Paralympic athletes to work as community ambassadors for RBC while bringing the Olympic messages of excellence, teamwork, leadership, and commitment to Canadian communities. In addition, athletes are outfitted with the necessary business skills to have a career after sport. At today’s event, RBC also announced that since the program began, nearly 200 current and retired Olympic and Paralympic athletes have participated in the RBC Olympians program, with 10 becoming full-time RBC employees.

About RBC and Amateur Sport
RBC supports amateur sport in communities across Canada, from recreational to competitive activities, and from grassroots to elite-level athletes. At the grassroots level, RBC is committed to supporting programs which help children develop the confidence and skills they need to enable them to play, and become happy, healthy and active for life. RBC is proud to be the longest-standing corporate supporter of the Canadian Olympic Team, since 1947, as well as a premier sponsor of Hockey Canada. Visit www.rbc.com/sponsorship.

RBC supports a broad range of community initiatives through donations, sponsorships and employee volunteer activities. In 2012, we contributed more than $95 million to causes worldwide, including donations and community investments of more than $64 million and $31 million in sponsorships.