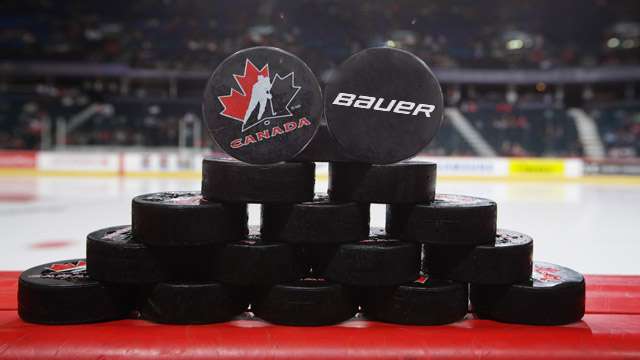 Favourite ()
TORONTO – Bauer Hockey, Inc., the world’s leading manufacturer of ice hockey equipment, and Hockey Canada announced today the next phase of their Grow the Game partnership, including initial research study results, as well as the creation of pilot programs developed to specifically address the results of those findings.

Launched in 2012, Grow the Game is a global initiative to add 1 million new players to the game of hockey by 2022, with Canada serving as the starting point of those efforts. Hockey in Canada has experienced low participation growth rates over the last few years, and today approximately 90 per cent of Canadian families and their children choose not to play hockey.

“We’re starting in Canada because it’s home to not only a deep hockey heritage, but it’s also where Bauer Hockey was founded in 1927,” said Kevin Davis, president and CEO of Bauer Performance Sports. “Some might say our goal is too bold, but the research shows that non-hockey families view the sport positively, and many would ‘definitely’ consider enrolling their kids. With these findings, our focus now turns to breaking down perceived barriers.”

Bauer Hockey and Hockey Canada commissioned an independent research initiative to better understand the considerations and barriers for non-hockey families and their children, as they decide to play different sports. The findings from the survey show that 73 per cent of non-hockey families would consider enrolling their child in the future, and nearly 40 per cent said they would “definitely” consider enrolling their child.

In addition to the positive signs for growth, the research provided an in-depth look at the perceived barriers for those who have decided not to enroll their children in hockey. These barriers were consistent across regions and demographics and include:

Hockey is not perceived as fun
Non-hockey families do not perceive hockey as a “fun” sport. Nearly every other sport in this research, such as soccer and baseball, was described as “fun” by respondents.
Perceived time commitment
Many parents cited too much required travel and a commitment of three days per week as a significant concern. Parents cited a need for options beyond one-size-fits-all, similar to the range of choices offered in other sports, for kids who want less time commitment.
Perceived safety
Many parents do not perceive the sport as safe for their children to play, including a risk of concussion and a belief that the game promotes violent behavior.
Perceived affordability
Although entry-level players can get on the ice at an affordable cost with the appropriate equipment for their skill level, parents cited the high costs of enrollment fees and equipment as perceived barriers.

“Hockey is a fun sport and through this exciting new initiative, Hockey Canada and Bauer Hockey want to ensure youngsters have opportunities to get on the ice and give it a try,” said Paul Carson, vice-president of hockey development for Hockey Canada. “By eliminating barriers preventing access to the sport, more girls and boys will be able to try hockey and have a fun, safe and positive experience, with the ultimate goal of growing our sport across the country and around the globe.”

The pilot programs to overcome barriers

To overcome these perceived barriers, Bauer Hockey and Hockey Canada announced the creation of pilot programs that will launch this fall in both Ontario and Nova Scotia. The programs, which will take place in Hamilton and Scarborough, Ont., as well as Halifax and East Hants, N.S., were designed to be fun, affordable and convenient. The pilot programs will focus on the following aspects in an attempt to begin breaking down the perceived barriers to entry.

A fun experience: Bauer, Hockey Canada and local governing bodies will host fun enrollment days for parents and kids, and provide informational materials on safety in the game, including the importance of equipment fit and educating parents on gear, the game and more.
Convenience: These six-week sessions will meet for one hour once a week, which keeps the commitment to a minimum and allows for participation in other activities.
Improved communication: Locally marketed to reach non-hockey families and to communicate fun, safety, convenience and affordability.
Affordability: Enrollment and equipment will be bundled together at a $100 cost.

After these programs are launched, tested and re-evaluated, they will be expanded into other regions to help grow the game.

Hockey Hall of Famer Mark Messier will assist Bauer Hockey and Hockey Canada in their efforts to attract additional players to the sport. Messier, who joined forces with Bauer Hockey last year following the company’s acquisition of Cascade Sports, has been deeply committed to growing the game and has been a vocal advocate for increasing participation and safety.

“I’m excited about the opportunity to continue working with Bauer Hockey and Hockey Canada to help take down these barriers and bring more people to our game, which is both fun and teaches valuable life lessons,” Messier said. “Along with the change in family lifestyles, the game of hockey has also changed. Kids need the opportunity to experience a variety of sports growing up, and it is our responsibility to offer our game in a way that is affordable, requires a reasonable commitment level, and most importantly, demonstrates how much fun hockey is for kids and families.”

ABOUT BAUER HOCKEY
Bauer Hockey is the world’s most recognized designer, marketer and manufacturer of hockey equipment. Founded in Kitchener, Ontario in 1927, Bauer Hockey developed the first skate with a blade attached to a boot, forever changing the game of hockey. Since then, Bauer Hockey has continued to develop the most sought after products in the industry, including the widely successful SUPREME®, VAPOR® and NEXUS® lines of products. Bauer Performance Sports Ltd., the parent company of Bauer Hockey, is a publicly-traded company on the Toronto Stock Exchange whose affiliates market products under the BAUER, MISSION, MAVERIK, CASCADE, INARIA and COMBAT brand names. For more information, visit Bauer Hockey’s website at www.BAUER.com.

ABOUT HOCKEY CANADA
Hockey Canada is the governing body for hockey in Canada and a member of the International Ice Hockey Federation (IIHF), with a membership through its 13 provincial branch associations of over 700,000 players, coaches and officials. Hockey Canada is a not-for-profit organization that creates leading-edge hockey development programs for its members to deliver in communities across Canada, provides consistent rules and regulations and various other membership services from coast to coast, manages numerous regional, national and international hockey championships and events, and leads the operation of all teams that represent Canada in international hockey competition. Hockey Canada’s mission is to “lead, develop and promote positive hockey experiences.”