CALGARY, Alta. – Strong defence was easy to see during Game 14 at the National Women’s Under-18 Championship, which saw Manitoba beat Atlantic 2-0 at the Markin MacPhail Centre on Saturday afternoon. This game put Team Atlantic in sixth place overall, while Manitoba claimed fifth with the win. 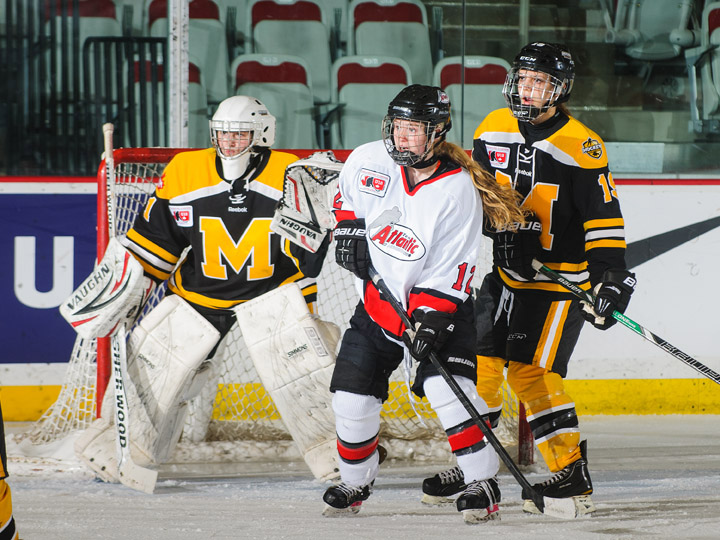 In the first, both teams did a great job defending their nets, letting only eight shots on goal for Manitoba and four shots on goal for Team Atlantic. Early in the period, Danielle Krzyszczyk (Winnipeg, Man./ St. Mary’s Academy, Canadian Prep) took a shot on a breakaway but was unable to put Manitoba on the board.

“After our last couple of games, we just wanted to come out strong,” Keen said after the game. “It was important to get the first goal of the game to get us started.”

Team Atlantic dominated Manitoba’s end in the second period, getting another four shots on goal all blocked by goaltender Devon Johnson (Stonewall, Man./ Stonewall Collegiate, Canadian H.S.). Quickly taking back possession, Grossi notched another one in for Manitoba, assisted by Kate Friesen (Altona, Man./ Pembina Valley, MFMHL). Five penalties were handed out in total for Manitoba in the second period, with one for Atlantic.

In the third period, both teams showed their determination to win, with neither team allowing many shots on goal, and protecting their goalies at all costs. Johnson stopped 27 shots on goal for Manitoba, while Carly Jackson (Amherst, N.S./ Cumberland County, Midget AA) made 16 saves for Team  Atlantic over three periods of play. The final score was a 2-0 shutout for Manitoba.

Semifinal games take place today at 4p.m. and 7p.m. MT at the Markin MacPhail Centre to determine who moves to the gold medal games on Sunday. You can watch the semifinals and bronze medal game live for free on FASTHockey by visiting www.hockeycanada.ca/nwu18.