But with the home province crowd ringing cowbells to back up their team, Alberta’s girls were able to dig deep and pull out a 5-4 win, with Alexandra Poznikoff (Edmonton, Alta/Edmonton, AMMFHL) scoring her third goal of the night to win the game in a shootout. It was her team’s second shootout victory of the 2013 National Women’s Under-18 Championship here in Calgary. 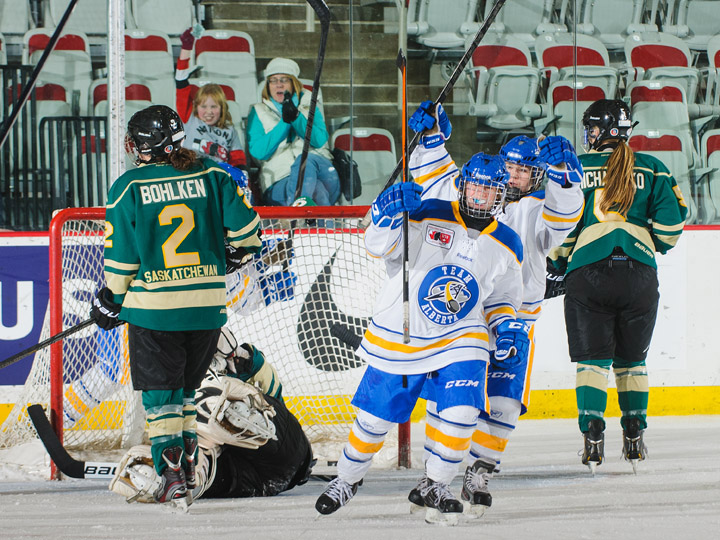 After a nail-biting 60 minutes and five minutes of four-on-four overtime, the game-winning goal from Poznikoff sent Alberta’s bench - and fans in the stands – into a frenzy of excited of cheers.

But it was undoubtedly a back-and forth game, and it was Saskatchewan forward Nicole Goebel (Saskatoon, Sask./Okanagan Hockey Academy, JWHL) who scored the first goal, with assists from Chelsea Perepeluk (Regina, Sask./Regina, SFMAAAHL) and Talia Terry (Regina, Sask./Notre Dame, JWHL).

Alberta responded back by screening Saskatchewan netminder Jane Kish (Weyburn, Sask./Weburn, SFMAAAHL), allowing Poznikoff to sneak her first goal of the night into the net to make it 1-1 midway through the first period.

Saskatchewan was determined to get their first win of the tournament, though, and Olivia Ellis (Wilcox, Sask./Notre Dame, SFMAAAHL) put it past the goal line at 13:44 in the opening frame to give her province a  2-1 lead going into intermission.

Both teams continued to skate hard during the second period. Tension built as Shae Labbe (Calgary, Alta./Warner School, JWHL) skated hard towards the Saskatchewan end, taking a slap shot to launch the puck into the top shelf of the net, tying it up again at 2-2 midway through the middle frame.

Kish lost her stick later in the second, giving Poznikoff the chance to find an opening between the goalie’s skates, and she buried the puck to make it 3-2 and earn her second goal of the game.

Sarah Lecavalier (Strathmore, Alta./Highwood, AMMFHL) was able to widen the gap despite Alberta being shorthanded, picking up the loose puck to make it 4-2 at 3:30 in the third.

But Saskatchewan captain Britannia Gillanders (Kyle, Sask./Warner School, JWHL) was able to add another at 8:12 in the period, putting her team within one goal of Alberta at 4-3.

With two minutes left in the final period, Brooklyn Haubrich (Hodgeville, Sask./Swift Current, SFMAAAHL) was able to tie it up with help from Gillanders and Hobson (Prince Albert, Sask./Prince Albert, SFMAAAHL). Both teams fought for the game-winning goal through the dying seconds but neither time was able to find the back of the net before time ran out on regulation play.

The fast-paced overtime period also ended without a goal, sending the game into the shootout that saw Poznikoff finish off her hat trick and Alberta earn its way to semis. Both goalies stood strong between the posts despite the shootout pressure.

“It was so exciting to come out with the win,” said Poznikoff, who was also named Alberta’s player of the game. “I was planning ahead in case my coach chose me, so I had it all ready. Luckily, it went in.”

“I plan on staying calm and just play loose (for the semifinals),” Poznikoff told Hockey Canada.ca following the game.

Alberta takes on defending champs Ontario Blue at 4 p.m. MT in the first semifinal Saturday, while Saskatchewan plays for seventh place at 10 a.m. MT. Watch all the action live on FASTHockey for free at www.hockeycanada.ca/nwu18.