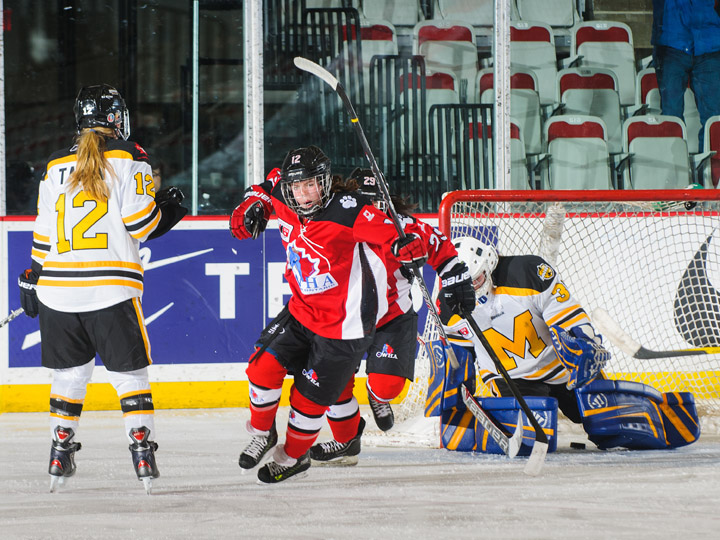 Ontario Red brought the game back in its favour by using smart forward plays to keep possession in Manitoba’s end, firing fourteen shots at Manitoba goaltender Kristen Campbell (Brandon, Man./Shaftesbury Academy, Canadian Prep) by the end of the first period. As the puck raced up and down the rink it was clear that these two teams were evenly matched.

Barely two minutes into the second period, Mackenzie MacNeil (Richmond Hill, Ont./ Toronto, PWHL) chipped one in for Ontario Red, quickly followed by another goal made by team member Amanda Pantaleo (Markham, Ont./Toronto, PWHL). The crowd was on the edge of their seats when only 60 seconds later, Ontario Red player Victoria Bach (Milton Ont./Mississauga, PWHL) scored a goal assisted by Ainsley MacMillan (Ilderton, Ont./ Mississauga, PWHL), making the score 3-2 for Ontario with 15 minutes left in the period.

In the start of the third period, Manitoba player Kate Friesen (Altona, Man./ Pembina Valley, MFMHL) received a penalty for tripping. Five minutes later, Ontario Red’s Bach received a penalty as well.  Rebecca Leslie (Ottawa, Ont./ Ottawa, PWHL) took a strong shot on Manitoba’s net, rebounding off the post. Neither time was able to find the back of the net again before the end of the period, and the game concluded with a score of 3-2 for Ontario Red.

This was the final preliminary game for both Ontario Red and Manitoba at the 2013 National Women’s Under-18 Championship. Placement and semifinal games take place Saturday at the Markin MacPhail Centre. You can watch the game live for free on FASTHockey by visiting www.hockeycanada.ca/nwu18, where you can also find game stories, stats and more.