CALGARY, Alta. – It was a battle at off the first puck drop, but by the time the final whistle blew Quebec had dominated Ontario Blue, beating the opposition 6-4 and skating away with two wins so far this week at the 2013 National Women’s Under-18 Championship. 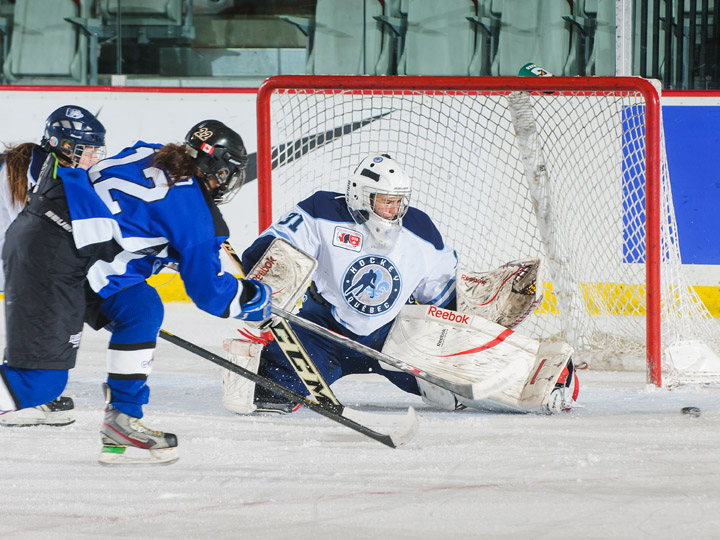 Valerie Audet (St-Bruno-de-Montarville, Que./Nord, Midget AAA) and Éve-Audrey Picard (Longueuil, Que./St-Laurent, RSEQ) both scored two goals en route to the victory, but from the offensive to defensive zone, the victory was a well-fought team effort for Quebec.

“We put lots of pressure on the other team,” Audet said after the game. “It was pretty much a team effort”

“It feels very good to get the win,” she added. “We practised really hard; it took us about six months to get here.”

Sarah-Eve Coutu-Godbout (Rouyn-Noranda, Que./Sud, Midget AAA) scored the first goal for Quebec midway through the first, which carried her province into the second period with a 1-0 lead.

But Ontario Blue fought back hard, with Kirsten Miller (Oakville, Ont./Oakville, PWHL) putting in a shorthanded marker just 35 seconds into the middle frame to tie it up. Audet and Picard both added goals before the period up to give Quebec a 3-1 lead going into the next intermission.

Yet Ontario Blue wouldn’t give up, and dug away enough to get three goals in the final frame, creating some intense back-and-forth play through the final 20 minutes, including two from Logan Boyd (Burlington, Ont./Burlington, PWHL) and one from Kennedy Marchment (Courtice, Ont./Durham West, PWHL).

Audet and Picard again led Quebec with a goal apiece in the third to again regain the Quebec lead, with a little help from penalty trouble by Ontario Blue. Annie Germain (Val-d’Or, Que./Limoilou, RSEQ) sealed the deal with last-second empty net goal for Quebec’s 6-4 final over Ontario Blue.

Placement and semifinal games take place Saturday at the Markin MacPhail Centre. Stop by the rink, or if you can’t make it out, you can still catch the game live for free on FASTHockey by visiting www.hockeycanada.ca/nwu18.