YARMOUTH, N.S. – Jeff Wight (Coquitlam, B.C./Merritt, BCHL) scored the game-winner with just 2:19 to go, leading Canada West to a 5-3 victory over Switzerland on Friday, and the bronze medal at the 2013 World Junior A Challenge. 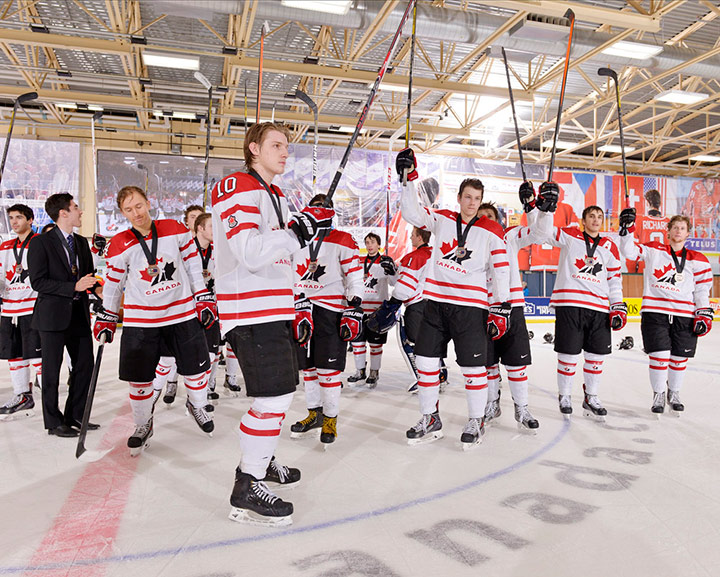 Wight and Hollman finished with multiple-point performances; both added an assist to their goal.

David Wildhaber, Thomas Studer and Riccardo Sartori scored for Switzerland, which trailed 3-0 just past the midway point of the second period before mounting a comeback.

It’s the first time in three trips to the World Junior A Challenge that Switzerland has not left with a medal; the Swiss were bronze medallists in 2010 and last year.

The scoring started early, with Jones batting in the game’s first goal just 59 seconds after the puck dropped. It would be the only goal of the first period, during which the Canadians were outshot 8-4.

Cooper converted on a power play seven minutes into the second period and Stoykewych pushed the lead to three at 12:05, seemingly putting Canada West in control, but the Swiss comeback started less than two minutes later.

Wildhaber got Switzerland on the board at 13:57, and Studer scored with the man advantage less than three minutes later to pull the Swiss to within a single goal headed to the second intermission.

The comeback was complete at 13:15 of the third period, when Sartori tied the game.

Undaunted, the Canadians continued to apply pressure, and were rewarded with the go-ahead goal when Wight dragged the puck into the slot and unleashed a rocket of a wrist shot over the glove of Swiss netminder Nicola Aeberhard.

Hollman scored into the empty net with 12.9 seconds left to provide the final margin of victory.

Aeberhard finished with 34 saves, while Canada West goaltender Jesse Jenks (Crofton, B.C./Prince George, BCHL) turned away 21 of 24 shots to pick up his third win of the tournament.