1. Dakota Boutin (Prince Albert)
He’ll never score a bigger goal. Boutin ended the longest game in the 41-year history of Canada’s National Midget Championship, scoring at 18:36 of the third overtime period to give the Mintos the national title. Boutin, who started the season in Moose Jaw with the host Generals, bookended the tournament – he had the first goal in Monday’s opening game in addition to Sunday’s winner.

2. Connor Ingram (Prince Albert) & Étienne Montpetit (Châteauguay)
How do you choose just one? Ingram and Montpetit put on a goaltending clinic in Sunday’s gold medal game, combining to stop 117 of 124 in shots almost five-and-a-half periods of hockey – Ingram finished with a slight edge in saves, 60-57. Both were at their best in overtime, making spectacular glove saves at each end to keep the longest TELUS Cup game ever going.

3. Linden Hora (Okanagan)
Hora started and finished the Rockets’ comeback in their 3-2 bronze medal game win over Toronto, getting them on the board six minutes into the third period before scoring the overtime winner. Okanagan’s medal is just the fifth by a B.C. team in 41 years; Burnaby Winter Club won a gold (1982) and two bronze (1977, 1980), and North Kamloops won bronze when it hosted in 1996.

1. Étienne Montpetit (Châteauguay)
Montpetit was almost unbeatable in the Grenadiers’ goal, making 39 saves and keeping Toronto off the scoreboard for the first 45 minutes while his team built a 5-0 lead. Châteauguay was outshot by the Young Nationals in every period, but Montpetit stopped 15, 13 and 11 shots, playing a major role as the Quebec champions advanced to their first-ever TELUS Cup gold medal game.

2. Lance Yaremchuk (Prince Albert)
The Mintos knew they needed to score goals against an offensive-minded team like Okanagan and Yaremchuk did just that, recording the second hat trick of the week, adding an assist and leading Prince Albert to Sunday’s final. Already with a goal in the first period, Yaremchuk added the game-winner early in the third, set up the insurance goal and capped his hat trick into an empty net.

3. Danick Crête (Châteauguay)
The Grenadiers spread around the scoring in their semifinal win over Toronto, with 10 players recording at least one point, but it was Crête who led the way from the back end. The Châteauguay defenceman got the scoring started two minutes in, took the shot that led to the final goal with two minutes left and added another assist in between, doubling his point total from three to six.

1. Tanner Campbell (Okanagan)
The Rockets’ No. 2 scorer during the regular season with 67 points in 38 games, Campbell had been quiet during the first four days of preliminary round action, held off the scoresheet entirely. But he broke out in a big way in Friday’s 11-2 rout of Toronto, scoring twice and adding two assists to help the Pacific Region champions become the 23rd team in 41 years to score 11 goals in a game.

2. Martin-Olivier Cardinal (Châteauguay)
With his team trailing 2-0 and time ticking down in the second period, the Grenadiers’ captain gave his team the spark it needed, rifling home a power play goal to cut the lead in half. Cardinal played big minutes with Châteauguay’s season on the line, and was on the ice to help set up Brandon McCulloch’s empty-net goal that helped clinch the 29th consecutive semifinal appearance for Quebec.

3. Lane Michasiw (Prince Albert)
Just another ho-hum shutout for the Mintos’ netminder, who needed to make just 17 saves for his second consecutive clean sheet, finishing the preliminary round with ridiculous numbers – a 2-0-1 record, 0.33 goals-against average and .988 save percentage. Michasiw capped an impressive round robin with a pair of awards, sharing Top Goaltender honours with Connor Ingram and earning the nod as MVP.

1. Lane Michasiw (Prince Albert)
It was only a matter of time before a Mintos goaltender reached the top spot, and Michasiw gets the nod after turning aside all 30 shots he faced to blank the Moose Jaw Generals 2-0. The win helped Prince Albert clinch a spot in the semifinals, and tied the all-time tournament record for longest unbeaten streak, at 18. Oh, and Michasiw has a 0.50 GAA and .985 save percentage in his two starts … not bad.

2. Ethan Marsh (Halifax)
The Macs’ remarkable comeback win over the Okanagan Rockets – in which Halifax scored four times in 10:31 to turn a 4-1 deficit into a 5-4 win – was a complete team effort, with eight players recording points in the third period alone. But Marsh had the game-winner, scoring the goal that kept the Macs’ semifinal hopes alive and setting up an exciting final day of preliminary round action.

3. Oliver Jacobs (Toronto)
First start of the week? Against the tournament’s highest-scoring team? With a chance to clinch a semifinal berth? No problem for Jacobs, who played a starring role in the Young Nationals’ 3-1 win over the Grenadiers de Châteauguay, stopping 23 of 24 shots, holding the Quebec champions to just a lucky-bounce goal early in the third period and making sure Toronto will take part in the weekend.

1. Marco Bozzo (Toronto)
Bozzo was a power play machine on Wednesday night, scoring three of the Young Nationals’ four goals with the man advantage in a win over the host Moose Jaw Generals. The Toronto forward scored from in close and on a tip-in in the first period, and hammered home his hat trick marker in the last minute of the third to help the Central Region champions to first place after three days.

2. Connor Ingram (Prince Albert)
Another day, another Mintos goaltender on the list. Ingram made it three-straight games with at least 30 saves for a Prince Albert netminder, stopping 30 of 31 to help the Saskatchewan side to a 1-1 tie with the Okanagan Rockets. Ingram and Lane Michasiw have been lights out for the Mintos, posting a combined .969 save percentage (95 saves on 98 shots) in their team’s first three games.

3. Tyler Hylland (Châteauguay)
On a day where more than half the Grenadiers skaters put their names on the scoresheet, Hylland led the way; the Mercier, Que., native had a goal and three assists and was in on four of the first six Chateauguay goals as the Quebec champions routed Halifax 7-3. Hylland was one of eight Grenadiers to record multiple points, and moved to second on the tournament scoring list.

1. Tanner Wishnowski (Okanagan)
Wishnowski jumped up one spot on the list from Monday thanks to another three-point performance. He opened the scoring for Okanagan, made it a 3-2 game with a spectacular end-to-end rush and set up Cory Santoro for the tying goal with another see-it-to-believe-it effort; through two games, the Rockets have scored six goals, and Wishnowski has been in on all six – three goals, three assists.

2. Tyler Longo (Toronto)
With his Young Nationals nursing a 1-0 lead after two periods, in a game that had featured only 19 shots to that point, Longo stepped up with a pair of insurance goals. He kept on a two-on-one early in the third period, beating Reilly Pickard under the glove, and hammered in the 3-0 goal from the slot with just over two minutes to go, clinching Toronto’s first win of the tournament.

3. Lane Michasiw (Prince Albert)
The Mintos goaltender turned in his team’s second straight 30+-save performance, stopping 35 of 36 to help the West Region champions earn a single point against Châteauguay. Michasiw made 29 of his saves over the final 40 minutes, including breakaway stops off Brandon McCulloch and Alexandre Payusov – two of the Grenadiers’ top scorers – to help Prince Albert to first place.

1. Justin Ritcey (Halifax)
The McDonald’s goaltender, making his second straight TELUS Cup appearance (he played with the Valley Wildcats in 2013), was spectacular in the tournament-opening 2-2 tie with the host Generals, stopping the first 29 shots he faced and finishing with 38 saves, many of them jaw-droppers. Ritcey almost single-handedly earned Halifax a single point despite being outshot 40-14 by Moose Jaw.

2. Tanner Wishnowski (Okanagan)
Wishnowski did it as the scorer and set-up man, and did it at even strength, on the PP and on the PK, helping the Rockets erase a 3-1 deficit and earn a single point against Châteauguay. The defenceman helped set up Brett Young’s shorthanded goal late in the first period, scored the 3-2 goal late in the second, and provided a pretty cross-crease feed to Liam Finlay for the tying goal in the third.

3. Dakota Boutin (Prince Albert)
Back on familiar ice, Boutin didn’t waste any time making an impact; the Mintos forward scored the first goal of the TELUS Cup and set up Lance Yaremchuk for the eventual game-winner – all in the first period – to help Prince Albert to the lone win on Day 1. The 16-year-old is no stranger to Mosaic Place; Boutin played last year, and the first 11 games of this season, with the Moose Jaw Generals. 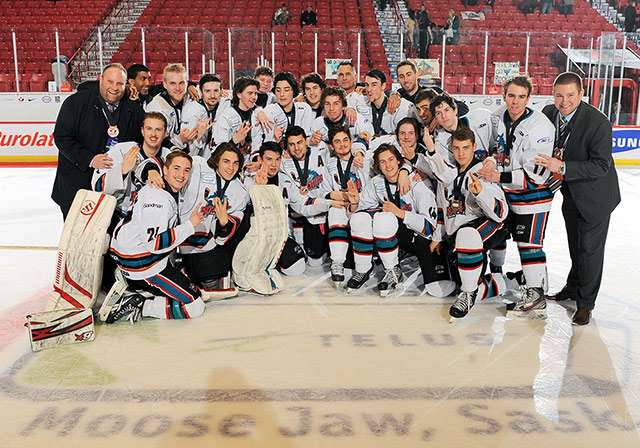 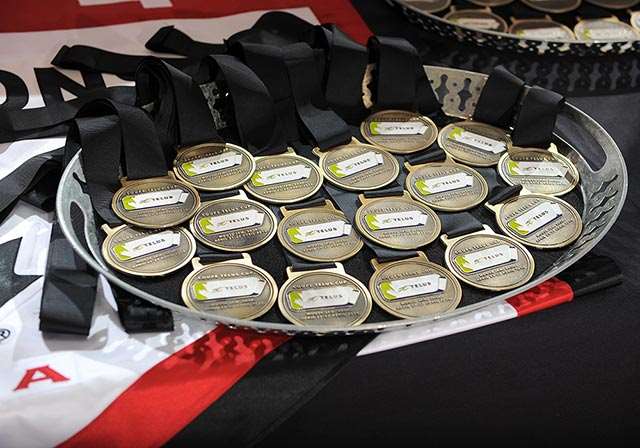 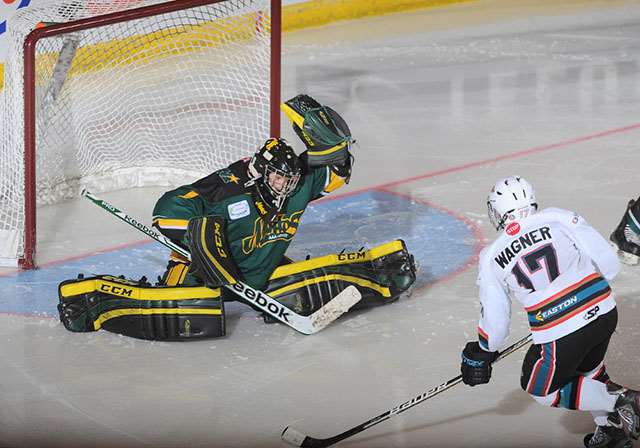 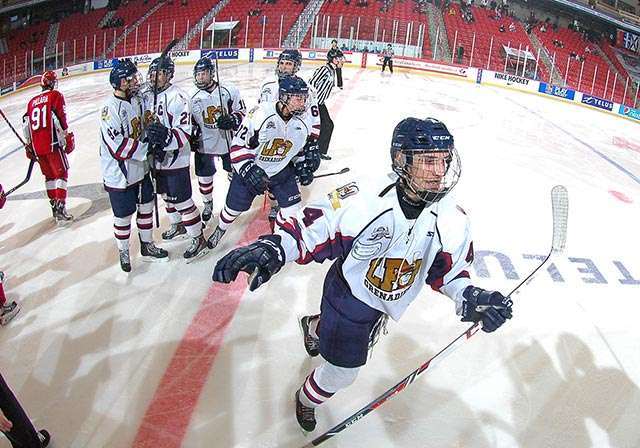