SAULT STE. MARIE, Ont. – Chris Gerrie scored twice and added two assists as the Red Deer Chiefs earned a chance to defend the TELUS Cup with a 5-1 semifinal win over the Saskatoon Contacts on Saturday afternoon. 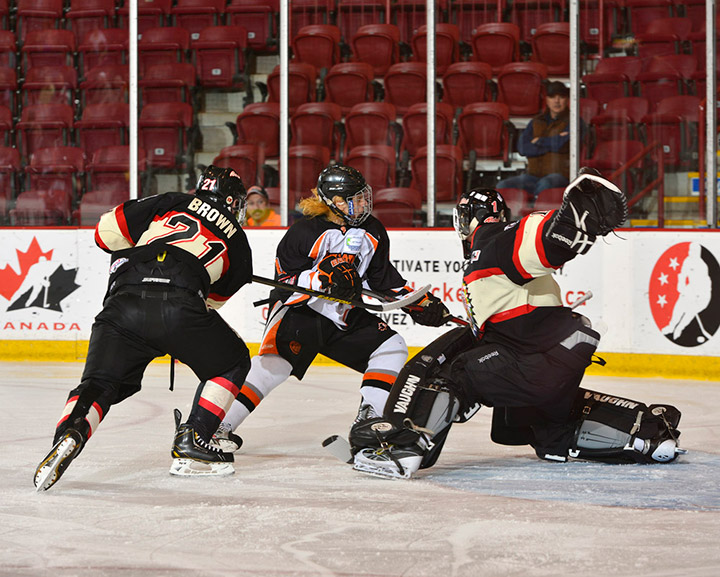 Chase Thudium, Colton Bobyk and Jacob Schofield had the other goals for Red Deer, which beat the Contacts in the semifinals for the second year in a row. Thudium and Bobyk also added assists to their goals.

Terrell Draude had the lone goal for Saskatoon, which will play for the bronze for a second consecutive season on Sunday morning (11 a.m. ET, FASTHockey).

It’s the first time since 2000-01 that back-to-back gold medal games at the National Midget Championship will not feature a West Region team.

The Chiefs opened the scoring with four-and-a-half minutes left in the first period when Gerrie stepped into the slot and snapped a shot past Saskatoon goaltender Rylan Parenteau.

Thudium and Bobyk tripled the lead in the middle frame with power play goals less than four minutes apart; Thudium deflected a Bobyk shot past Parenteau for the 2-0 goal at 4:25 before Bobyk blasted home a point shot to make it 3-0 at 8:01.

Draude pulled the Contacts to within two with 7:31 left in the third, but Gerrie restored the three-goal lead just 50 seconds later and Schofield capped the scoring 1:35 after that.

Parenteau made 19 saves for Saskatoon, while his Red Deer counterpart, Matt Zentner, finished with 23 stops.