While U9 is not an official Hockey Canada Officiating Program (HCOP) system, associations can use developing officials in a one-official system. This provides officials with an opportunity to experience several aspects of officiating, while keeping operating costs at a manageable level.

There are benefits for officials to build foundational skills. It is a valuable opportunity for newer officials to put on their uniform, get into live action and learn officiating basics in a less formal and positive atmosphere. Basic skills include dropping pucks, skating skills, foundational positioning, spatial awareness, establishing good sightlines, communicating with coaches and making decisions such as goals and minor penalties.

In addition to young officials applying their skills in a game environment, U9 half-ice games also provide an excellent opportunity for senior officials to mentor newcomers by shadowing them on the ice or evaluating them from the stands.

Having an official for half-ice games provides players with more structure. It also presents a more realistic game environment, while allowing the coaches to keep their focus on the players.

Flexibility is an important component to operating in a one-official system. There is no absolute way to handle every possible scenario. However, game flow and establishing a basic structure to the game is the primary focus.

Positioning of the Official

Foundational positioning principles will be used. In a half-ice set-up, general positioning is used to get officials comfortable with their proximity to the goal. Officials should follow the play approximately 2-3 metres behind the puck carrier and remain about one metre from the boards or playing-area perimeters.

Officials are encouraged to move towards the net on goal situations and away from the play towards the boards as play comes towards them, allowing players to pass by; the official can then follow at a safe distance. 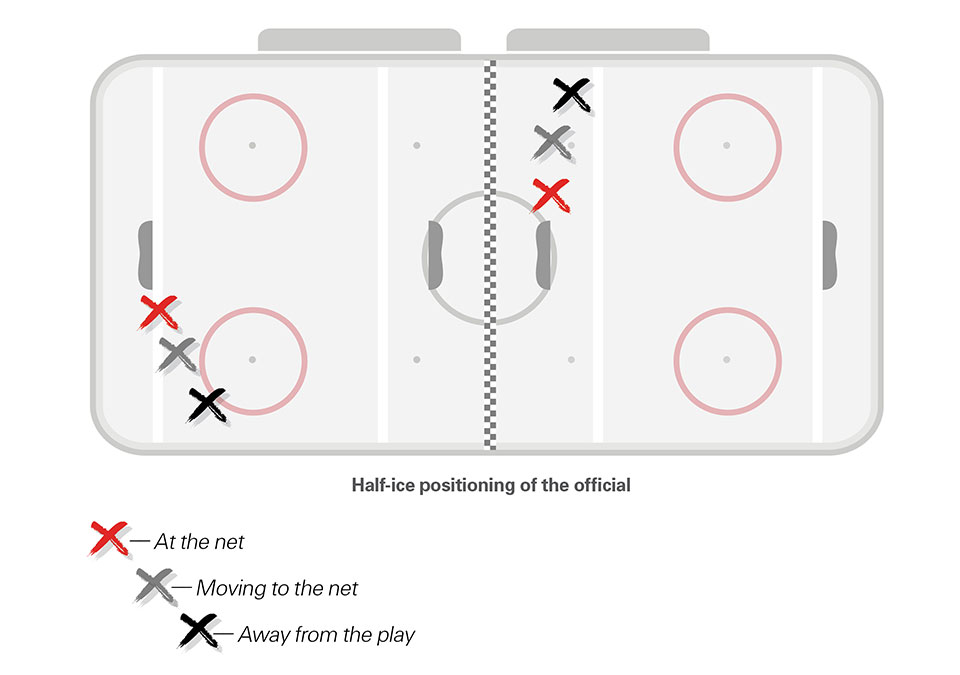