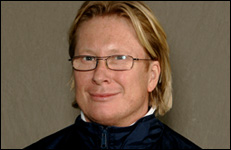 Director of hockey development and national teams with the Swedish Ice Hockey Association … Led the total overhaul of the Swedish development and Junior system in the early 2000s, resulting in Sweden again producing some of the best talent in the hockey world today … Made the List of The 100 Most Powerful People In The Game in The Hockey News ... Acts as a Team Sweden scout during the Olympic Games and at various world championships … Served as head coach for Djurgarden, Hammarby, Linkoping and Frolunda in the Swedish Elite League.