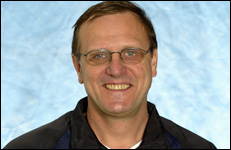 Currently serves as vice-president and manager of hockey programs for the Slovak Ice Hockey Association …  Arguably one of the most accomplished European coaches of the last decade … led the Slovak team to a bronze medal at the 1999 IIHF World Junior Championship in Winnipeg, Man., which was Slovakia’s best ever result at that tournament … Took over the men’s national team shortly after winning World Junior bronze and led Slovakia to a silver medal at the 2000 IIHF World Championship in Russia … Biggest triumph was when Slovakia defeated Russia 4-3 at the 2002 IIHF World Championship in Sweden, a win that is still considered to be the biggest sports achievement in his country’s history … Has coached Team Slovakia in two Olympic Winter Games, including an impressive fourth place finish this year in Vancouver, B.C.