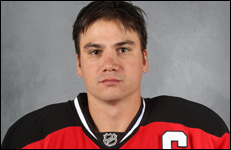 Selected as the Dallas Stars’ second-round choice (35th overall) in the 1993 NHL Entry Draft … Traded to New Jersey on March 19, 2002, along with Joe Nieuwendyk, for Jason Arnott, Randy McKay and a first-round pick (later traded to Buffalo - Sabres selected Dan Paille) in the 2002 NHL Entry Draft … Born on July 24, 1975, in Duluth, Minn. … He and his wife, Elizabeth, have three children: Laine, Landon and Mason