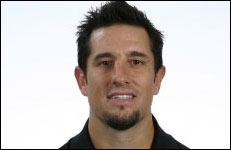 President of Windsor Spitfires Hockey Club … Selected 32nd overall by the Detroit Red Wings in the 1989 NHL Entry Draft … Appeared in 630 NHL games, scoring 72 points and amassing 1382 penalty minutes during his 10-year career … Served as the Executive Vice-President of the NHL Players' Association from 2003-06 … Headed new ownership group which purchased the OHL’s Windsor Spitfires in February of 2006 … Served as head coach of the Spitfires for four seasons including a franchise record setting 2008-09 season which included a 115 point campaign, an OHL regular season title, the franchise’s second ever OHL title and first ever MasterCard Memorial Cup title … In 2010 led the Spitfires in becoming the eighth CHL team to win back-to-back Memorial Cups … Named back-to-back OHL Coach of the Year and CHL Coach of the Year in 2007-08 and 2008-09 … On the international stage, served as head coach of Team Canada's Men's Under-18 National Team and led them to a perfect 4-0 record and first place finish at the 2009 Memorial of Ivan Hlinka Tournament in the Czech Republic … Recently hired as assistant coach for the Columbus Blue Jackets