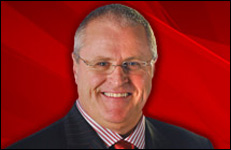 To Canadians, he’s known simply as the TSN Hockey Insider.

McKenzie has been covering hockey for the past 30 years and is one of the most respected analysts in the business. His unparalleled contacts in the hockey world, combined with an abundance of hockey knowledge and a genuine love for the game, make McKenzie the most well-informed, trusted and connected man in the business.

McKenzie joined TSN in the late 1980s as an analyst on SportsCentre and Molson That’s Hockey, and has been a fixture on the network ever since covering the NHL, IIHF World Junior Hockey Championship, NHL Draft, NHL Trade Deadline and five Olympic Games including the Vancouver 2010 Olympic Winter Games.

McKenzie’s considerable contributions to the game have been recognized by The Hockey News over the years, as he has been selected nine times as one of the game’s 100 most powerful and influential people.

Prior to joining TSN, McKenzie was the editor-in-chief of The Hockey News for nine years and a hockey columnist for The Toronto Star for six years.