A women's ice hockey player from Canada. She was the first woman to play full time professional hockey in a position other than goalie. Wickenheiser has represented Canada at the Winter Olympics four times, capturing three gold and one silver medal, twice being named tournament MVP. She is widely considered the greatest female ice hockey player in the world. 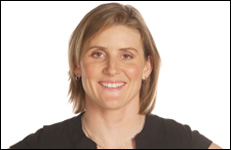 Daughter of Tom and Marilyn … Nickname: Wick … Resides in Calgary, Alta. with boyfriend Tomas and son Noah … Has one brother, Ross, and one sister, Jane … Is the subject a children’s book entitled “Born to Play”, published by Kids Can Press and authored by Elizabeth Etue … Named one of Sports Illustrated Top 20 ‘Toughest Athletes’ in 2008 … Received the Bruce Kidd Award for athletic leadership at the 2001 Canadian Sports Awards … Member of Canada's National Softball Team at the 2000 Summer Olympics in Sydney, Australia … Has a web site dedicated to her career at www.hayleywickenheiser.com … Cousin of the late former NHLer Doug Wickenheiser … In July of 2006, the sportsplex in her hometown of Shaunavon, Sask. was renamed Wickenheiser Place in honour of her athletic accomplishments … In 2007, the community of Silver Springs in Calgary dedicated an outdoor rink in her name, called Hayley’s Rink … Active in several local and international charities: Spread the Net, Clean Air Champions and Right to Play … In May 2007, she travelled to Rwanda with four other Olympians as part of Right to Play