Learn about the history of Hockey Canada 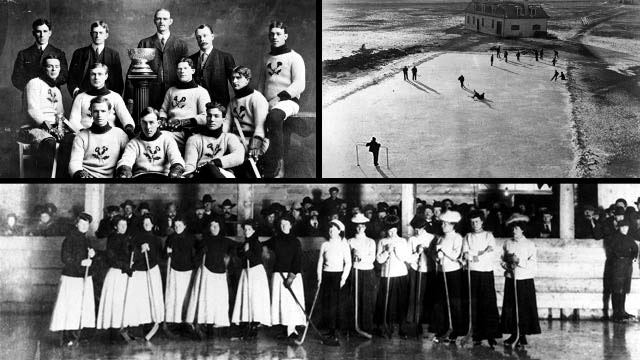 It begins Dec. 4, 1914, when 21 stakeholders in the game from across the country – from New Westminster, B.C., to Montreal – gather at the Chateau Laurier in Ottawa. The Canadian Amateur Hockey Association is formed to oversee the amateur game at a national level, and the Allan Cup, donated by Montreal banker and steamship line owner Sir H. Montague Allan, C.V.O. in 1908, is selected as the championship trophy of amateur hockey. Allan Cup trustee William Northey is selected as the first chairman of the CAHA, and Dr. W.F. Taylor is the first president. 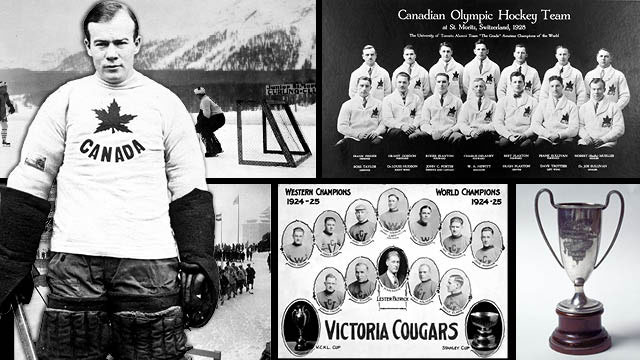 The decade begins with Canada’s first success on the international stage; the Winnipeg Falcons win the first-ever Olympic hockey gold medal, albeit at the Summer Games in Antwerp, Belgium. A second and third gold would come at the first two Olympic Winter Games, in Chamonix, France in 1924 and St. Moritz, Switzerland in 1928. The CAHA continues to grow, with the addition of the Ottawa and District Amateur Hockey Association in 1920, and Maritime Amateur Hockey Association – comprising New Brunswick, Nova Scotia and Prince Edward Island – in 1928. 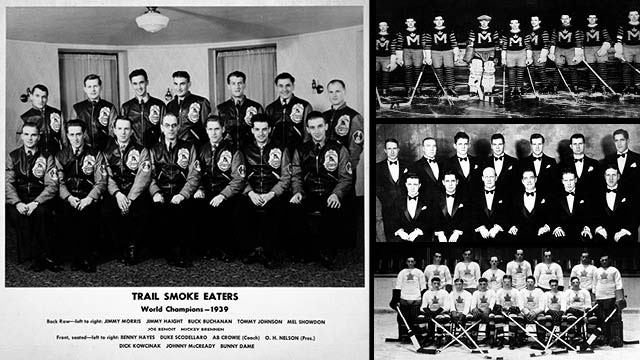 Beginning in 1930, the International Ice Hockey Federation holds the world championship in non-Olympic years, and over the course of the decade Canada wins eight gold medals, including a fourth Olympic title in 1932. But the United States and Great Britain end the Canadians’ stranglehold on gold; the U.S. wins its first world championship in 1933, beating Canada in overtime in the gold medal game, while the Brits take Olympic gold in  1936, leaving Canada with silver. Minor hockey continues to grow across the country; from 1924-33, the CAHA reports registration almost triples, from 6,800 to more than 17,000. 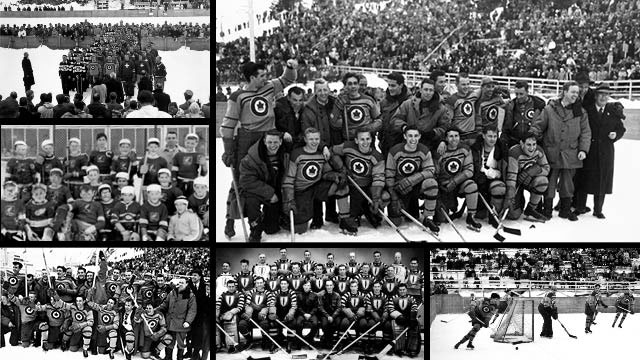 With World War II underway in Europe, senior hockey thrives across Canada; Canadian Forces teams are stocked with NHLers on leave from their pro teams, and players who will be future stars of the game.  On June 30, 1947, the NHL, CAHA and the Amateur Hockey Association of the United States come to an agreement that sets the stage for the next decade: no amateur player under the age of 18 can become a pro unless his amateur team agrees; it’s an important stage in the evolution of players’ rights. The International Olympic Committee rewrites the rules on amateurism in 1947 with a much tougher distinction. As a result, Canada can’t send the Allan Cup champions, the Montreal Royals, to the 1948 Olympics. A Canadian Forces team, the RCAF Flyers, makes the trip to St. Moritz instead, and wins gold. 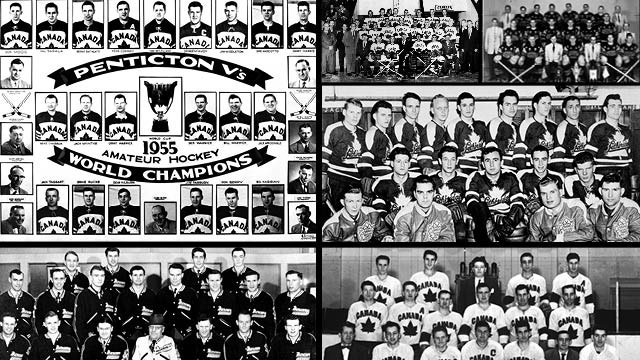 Canada continues to add to its gold medal collection at the IIHF World Championship and Olympic Winter Games, winning six world titles, including Olympic gold in 1952. But the Edmonton Mercurys’ Olympic triumph is the last for Canada for 50 years, and the decade sees the rise of Sweden, which wins its first world title in 1953, and the Soviet Union, which begins its run of success by winning gold in its debut in 1954. 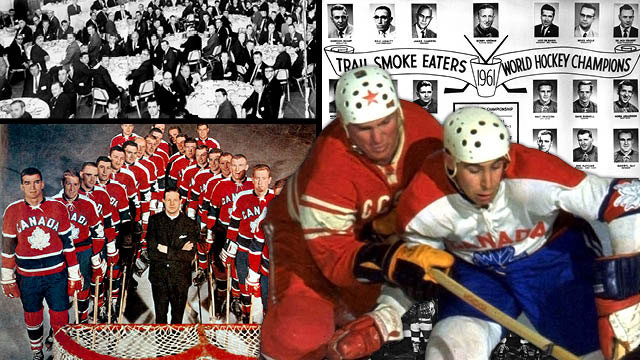 The Trail Smoke Eaters win Canada’s 19th gold medal at the 1961 IIHF World Championship, but it will be the last world title for Canada for 33 years. In response to the success of the Czechs, Soviets and Swedes, the CAHA creates the first National Men’s Team, operated by Father David Bauer at UBC in Vancouver ahead of the 1964 Olympic Winter Games, but it can manage no better than three consecutive bronze medals from 1966-68. As the CAHA approaches its 50th anniversary, it creates the Order of Merit, recognizing individuals who have given tirelessly to amateur hockey in Canada. The organization continues to grow, opening its first national office in Winnipeg in 1967. The Newfoundland Amateur Hockey Association joins the CAHA in 1966, while New Brunswick leaves the Maritime AHA and creates its own branch in 1968. 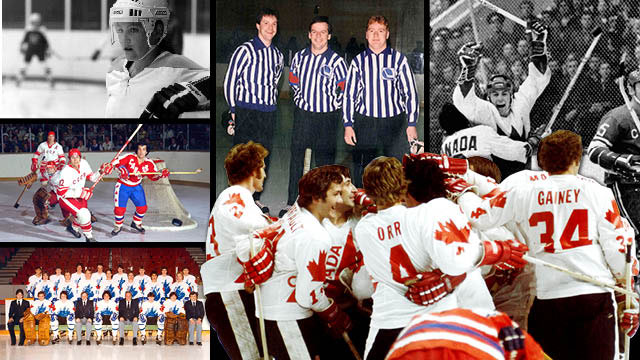 Canada takes a major stand to begin the decade; to protest the exclusion of professional players from IIHF competitions, Canada withdraws from international play from 1970-76, missing out on two Olympic Winter Games. Despite this, Canada’s best players get to represent their country for the first time in 1972, when Canada and the Soviet Union meet in the epic eight-game Summit Series, a major turning point in the history of the international game, and the precursor to the first-ever Canada Cup in 1976. Domestically, national championships are created for Junior A (Centennial Cup) and Midget (Wrigley Cup) hockey, in 1971 and 1974, respectively. The Maritime Amateur Hockey Association is no more when Nova Scotia leaves to create its own branch in 1974, leaving P.E.I. on its own, and the CAHA celebrates the hiring of Murray Costello as its first full-time president in 1979, paving the way for major changes to how the organization operates. 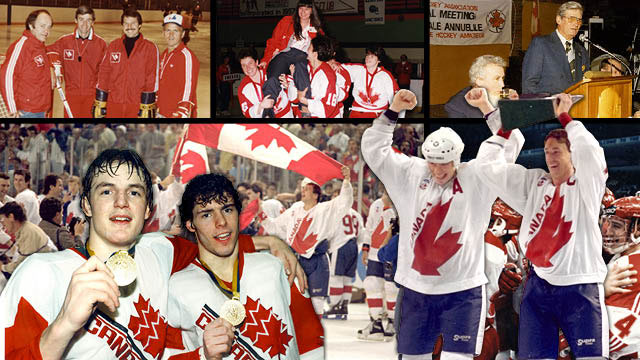 Canadian high performance hockey is changed forever with the creation of the Program of Excellence in 1981, which brings together Canada’s top young players at the under-17, under-18 and under-20 levels. After years of sending league all-star teams and Memorial Cup champions to the IIHF World Junior Championship, Canada sends its first true national team in 1982, and wins its first-ever gold medal, adding a second and third in 1985 and 1988. Canada also has success at the Canada Cup, winning the best-on-best tournament in 1984 and 1987, and welcomes the world’s biggest sporting event for the first time when Calgary plays host to the 1988 Olympic Winter Games. The creation of the national women’s championship in 1982 is another step in the unprecedented growth of the female game, leading to the first unofficial world championship in 1987, and the creation of Canada’s National Women’s Team late in the decade. 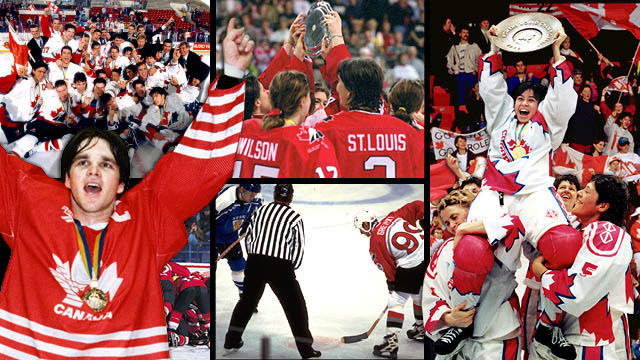 The decade begins with another first, as Ottawa hosts the inaugural IIHF World Women’s Championship, won by the home country (wearing pink). Canada’s National Junior Team dominates the decade, winning five consecutive gold medals from 1993-97, Canada’s National Women’s Team doesn’t lose a world championship game during the decade, winning five gold medals, and Canada’s National Men’s Team ends its 33-year gold medal drought at the world championship with a shootout win in 1994. In all, Canada finishes the 1990s with 14 gold medals at the IIHF World Championship (two), IIHF World Women’s Championship (five) and IIHF World Junior Championship (seven), including a sweep of all three in 1994 and 1997. The 1998 Olympic Winter Games usher in a new era of Olympic hockey, with NHL players allowed to play in the men’s tournament for the first time, and women’s hockey making its debut. Hockey North joins the CAHA as the 13th and most recent branch in 1998, the same year the CAHA and Hockey Canada merge under the Hockey Canada name, bringing every aspect of Canadian hockey under one umbrella. 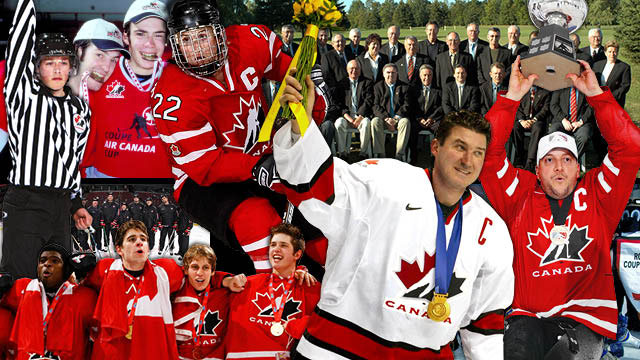 Canadian hockey reaches a new high in 2002, with both the men’s and women’s teams winning gold at the Olympic Winter Games in Salt Lake City, and the women make it back-to-back gold medals four years later in Turin. Canada’s National Sledge Team joins the Hockey Canada family in 2004, and two years later climbs to the top of the Paralympic podium for the first time. Canada’s National Men’s Team wins its 24th and most recent world title in 2007, its last of three in the decade, joining back-to-back gold in 2003 and 2004. For the second time, Canada’s National Junior Team runs off five consecutive gold medals at the IIHF World Junior Championship, from 2005-09, and the event becomes one of the highlights of the international hockey calendar, particularly when it is hosted in Canada. In addition to its two Olympic gold medals, Canada wins four more gold medals at the IIHF World Women’s Championship, and in response to the growth of the women’s game, the first Esso Cup, Canada’s National Female Midget Championship, is held in 2009. 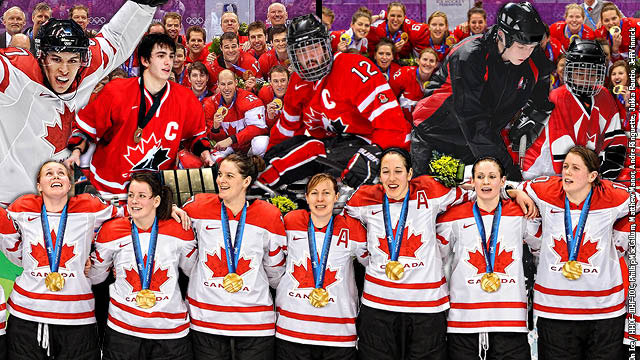 The decade begins with arguably Canadian hockey’s shining moment; with the eyes of the sporting world on Vancouver for the 2010 Olympic Winter Games, Canada’s men’s and women’s teams both win Olympic gold, providing fans with a once-in-a-lifetime home ice Olympic moment. Four years later the feat is repeated, this time in Sochi, Russia. Canada’s National Women’s Team reaches double digits in world titles, winning its 10th in 2012, while Canada’s National Sledge Team claims a third world championship in 2013. Minor hockey registration passes another milestone, surpassing 600,000 players for the first time for the 2011-12 season.